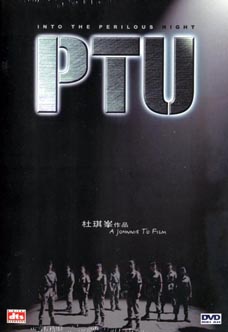 Veteran Hong Kong action director Johnnie To sets the stage right from the start of PTU when the head of the Police Tactical Unit, Sgt. Mike Ho (Simon Yam), chastises his colleagues for taking the death of an officer lightly. His loyalty to other officers is put to the test when Sgt. Lo (Johnnie To regular Suet Lam) loses his gun. Lo will lose his promotion next month if his superiors find out, especially if he&#146;s lost the gun to some young triad members as he believes he has. To make matters worse, their leader, Ponytail, has just been murdered and they may likely use the gun to get back at a rival gang. When Ho finds out, he refuses to report the missing gun, but Criminal Investigation Department stickler Leigh Chen (Ruby Wong) who&#146;s looking into the Ponytail homicide, is much less sympathetic. She quickly intuits a connection between Ponytail and Lo and presents a danger to the careers of both Lo and Ho.

To has a few terrific films under his belt &#150; The Heroic Trio, A Hero Never Dies &#150; and while PTU as a whole doesn&#146;t reach those heights, its virtuoso opening sequence might be the best segment To has ever assembled.To initially presents Ho as one tough, mean cop who scares one gangster to do pushups while intimidating another to move from his restaurant table.Then step by step, To undermines this initial impression. The sequence is a frenzy of activity with a leaky air-conditioner, yellow paint, and ringing cell phones escalating the small confrontations, deadpan humor, petty vengeances, and absurdist violence.The only flaw here is To using a cheesy riff of the Eagles&#146; &#147;Hotel California&#148; on the soundtrack.The rest of the movie never matches this peak opening.

PTU is certainly To&#146;s most self-consciously arty film, which probably helped to get it into the New York Film Festival.The style is epitomized by extended stretches of silence and carefully composed master shots. One scene of rain descending on all the various characters in a misty drizzle is especially beautiful. To shoots Hong Kong like a cavernous labyrinth illuminated by harsh spot lights. The formal style combines well with the grittiness of To&#146;s past films, but unlike those movies, PTU lacks real characters to care about.

In PTU, the characters are all defined by their place in the plot.They don&#146;t come alive organically, but seem distant and abstract.Simon Yam as Mike Ho comes closest to being the exception.Yam has been an icon of Hong Kong grindhouse cinema for a decade now, averaging a prolific six films a year in that period. While he&#146;s wallowed in a lot of grade-Z movies, he&#146;s probably most famous for John Woo&#146;s Bullet in the Head and the more recent Fulltime Killer (another Johnnie To film).The character’s casual brutality to street lowlifes and his devotion to Lo bespeak a willed ignorance to broader moral concerns.To doesn&#146;t do enough with this fascistic impulse except to create some empathy with one of the gangsters who Ho nearly slaps into the next life. Because of the lack of character development, when the blazing shootout ending comes along, it looks dazzling, but feels strangely empty and slight.