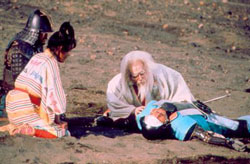 Akira Kurosawa was a prolific director, creating 31 films over a half century. Whether working on an intimate scale (Ikiru, 1952) or in epic mode (The Seven Samurai, 1954), he was profound in his observations, skilled at storytelling, and unsurpassed in his mastery of the film medium.

There is so much genius in the body of Kurosawa’s work that the word "masterpiece" becomes a tautology – the films are that consistently rich in content and impeccable in execution. What superlatives are left, then, for Ran (Chaos) – a late (1985), large-scale work that encompasses four decades of filmmaking experience and the wisdom of a lifetime? It is two hours and forty minutes without a misstep; it creates a feeling of time suspended.

In Ran, Kurosawa uses the inspiration of Shakespeare’s Lear, the aged and weary king who divides his kingdom among his three daughters and is repaid in miseries for his own vanities. Kurosawa transmutes the daughters into sons and adds elements from Japanese history and legend. Lord Hidetora, as he divides his kingdom – retaining imperial privilege for himself – urges his sons to unity. One arrow is easily broken, he demonstrates, but three arrows together are strong. Saburo, the youngest son, breaks the bunch of three arrows; a promise of filial loyalty will not hold together a kingdom conceived in brutal warfare, he observes. Hidetora, furious, banishes him. The great irony of the tale, of course, is that Saburo, who tells the truth instead of dissembling to his father, is the one who loves him most, the only one not to betray him.

In that scene, the sons are each garbed in robes of a different color – yellow, red, blue. Those colors parallel the colors each son’s soldier’s carry into battle. Kurosawa’s scenes of cavalry and footsoldiers massing for battle are like cinematic ballet, screen pictures of arresting beauty that keep the complex storyline hypnotically clear.

A whole range of memorable characters are established in addition to Hidetora and his sons. Kyoami, the Fool (played by popular transvestite performer Shinnosuke Ikehata), in traditional fashion, uses the role of Fool to speak truths others dare not, as well as providing comic relief. In one line he captures the pervasive mood of the tragedy: "Man is born crying; when he has cried enough, he dies."

Hidetora’s victims are everywhere, testaments to the lifetime of cruelty for which he now pays heavily. His daughter-in-law, Lady Sue, whose family was murdered and whose brother, Tsurmaru, was allowed to live only after gauging out his own eyes, has taken refuge in Buddhism. The other daughter-in-law, Lady Kaede(an intense performance by Mieko Harada), whose family was also wiped out, lives only for revenge and she will use her knife or her sex to achieve it. Her destiny is appallingly appropriate to her relentless stratagems for vengeance.

Kurosawa’s brilliant visual conceptions and firmly controlled palette are significantly enhanced by his use of sound – or, in one major battle scene, the absence of the sounds of the battle, the horrors of war somehow magnified by the silent screams and the unheard bullets, only the quietly mournful dissonance of Toru Takemitsu’s score to be heard. Castle gates close with resounding, hollow booms – shutting people out, shutting people in. A crescendo of cicadas. And the final anguished shriek of Tsurmaru’s solo flute more effectively gives voice to the great tragedy that has been played out than closing words might have done.