Steven Spielberg’s “Ready Player One” chronicles an epic battle for control of a fully immersive, massively multiplayer online virtual reality space known as the OASIS where users escape the depressing dystopic reality of the story’s 2045 setting.

Based on the novel of the same name by Ernest Cline, the film premiered in the author’s hometown of Austin, TX as part of the 2018 South-by-Southwest festival, which also showcased 25 short VR productions in a concurrent Virtual Cinema exhibition (the latest evolution of a SXSW programming track that began in 2016).

So, how far is the current state of actual virtual entertainment from the all-consuming OASIS of Cline and Spielberg’s imagined future?

To find out, your fearless Culture Vulture correspondent ventured into the Virtual Cinema lounge (and sustained a mild head injury — more on that later) to sample the pros and cons of the burgeoning art form. 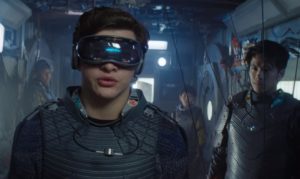 In “Ready Player One”, users can jack into the OASIS and interact with each other from virtually anywhere, with mass log-ins available at places like the headquarters of the film’s villainous IOI corporation. But in 2018, VR is still a largely solitary pursuit, and mass log-in opportunities were definitely in short supply at the JW Marriot salon where SXSW hosted its Virtual Cinema screenings. As a result, long lines made it difficult to see more than a handful of the offerings available, meaning I never got close to experiencing Together by Terrence Malick (whose elliptical feature films already make viewers feel like they’re randomly spinning around 360-degree visual environments) or something called The Evolution of Testicles by Ryan Hartsell. 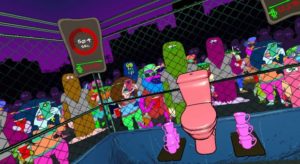 However, those patient enough to get their turn with a headset at one of the SXSW Virtual Cinema stations quickly discovered that VR has advanced quite a bit from the clunky graphics of big goggle 1980s arcade gimmicks like “Battlezone” — though games still seem like the most satisfying current use of the technology based on the hellaciously fun experience of demolishing imaginary toilets and televisions with a make-believe bat in Chris Prynoski’s “Smash Party”. But the truly jaw (and stomach) dropping moment came when the ground seemingly crumbled away at one point, leaving me on a wooden plank spanning a bottomless pit — which, in a state where your true senses have mostly been replaced by visual and auditory illusions, counts as a uniquely visceral experience. 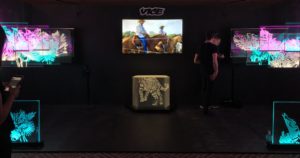 Unfortunately, the disadvantage to that level of disorientation became apparent a short time later at “Living with Jaguars”, directed by Patrick McGuire and Jeff Orlowski, a VR documentary about an ecotone clash between ranchers attacking the endangered jaguars attacking their cattle in Brazil. On the plus side, the presentation allowed viewers to interact with virtual objects (including the option of enjoying the experience from beneath a wide-brimmed digital hat) while navigating a map to listen to fairly two-dimensional interviews with various experts and conservationists searching for solutions. But with so many people waiting at each station for a turn, it was hard to really relax and concentrate on long stretches of Virtual Cinema content (especially when, as with “Jaguars”, the controls weren’t always intuitive and the visuals were occasionally fuzzy — a problem that seems to crop up from time to time with most current VR, since goggles must constantly be adjusted and readjusted to the demands of different sets of eyes). Yet while such outside distractions can disrupt VR’s willing suspension of disbelief, that’s nothing compared to exiting the virtual world back into real life without a proper adjustment period (as I discovered upon disengoggling then smacking my forehead against one of the sharp-edged Lucite panels flanking the “Jaguar” viewing area, a non-virtual reminder that actual reality is that which doesn’t disappear into digital pixels when you bonk your skull against it). 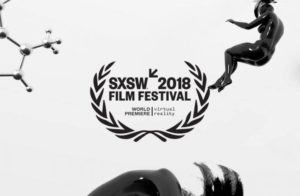 Still and all, wandering through a 360 jungle documentary wearing a virtual sun hat definitely suggested the impressive non-game, OASIS-y artistic possibilities in VR’s future, as did “Tiniest Tremor” by Nicholas Manting Brewer and Megan Simon, which added an emotional dimension to the technology’s “gee whiz” factor, to impressive effect. The visuals of the experimental animated short were interesting and kept my head on a swivel as giant nude mothers and infants rose all around me from a surreal black ocean. But what made the spectacle especially engaging was the voiceover story on the soundtrack providing context as a former opioid addict described her grief at the Neonatal Abstinence Syndrome her newborn child was forced to endure as a result of her own substance abuse during pregnancy. 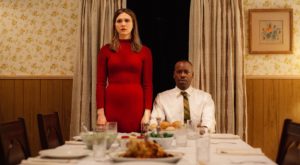 Yet for all the fun of “Smash Party” and the artistry of the other productions, the project that seemed to push virtual cinema the furthest in the direction of an eventual cinematic paradigm shift was “Dinner Party” by director Angel Manuel Soto. Not only did the viewing area feature a fully dressed table setting to ease viewers smoothly from one reality to another, but the naturalistic household of the short’s opening scenes, with characters lounging and chatting on all sides of the viewer, recalled the excitement of immersive theatrical experiences like “Tamara” and “Sleep No More”, where no two viewers ever perceive the drama in exactly the same way. Unlike those live productions (or the OASIS), however, it’s impossible to roam VR environments with the illusion of complete freedom at this point (since the experiences are still “on rails,” with viewers merely deciding where to look) — though that was enough to provide some startling moments in “Dinner Party” (like a nighttime driving scene where I turned my back on a conversation in a car to watch the oncoming road until the front of the vehicle slowly emerged from my torso, or the jump scare effect of turning my head and coming face-to-face with a gasp-inducing sight), indicating the next revolution in entertainment won’t be televised: it’ll be all around us.