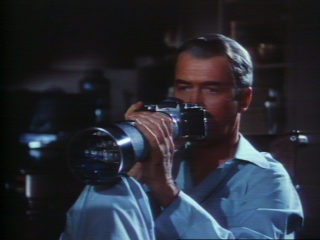 Alfred Hitchcock’s Rear Window – made in 1954 and just restored for re-release – is a miraculous film. It’s a witty, sexy, supremely entertaining thriller. It’s also the most provocative meditation on moviegoing ever made.

On its face, it’s an allegory so transparent it risks banality. Photographer L.B. Jefferies (James Stewart), immobilized with a shattered leg, spends his convalescence spying on his neighbors. Alone in his apartment, he has a multiplex to himself, with a different genre playing in each window. There’s Miss Lonelyhearts’ tearful melodrama, the romantic farce of Miss Torso and her suitors, and the stark drama of the travelling salesman and his bedridden wife, which soon begins to look instead like a murder mystery.

The film remains unsettling because Hitchcock took such sadistic glee in implicating the audience in Jefferies’ voyeurism. When his girlfriend admonishes him for his ghoulishness, she’s talking to us as well. Hitchcock is rigorously exacting in the extent to which he forces us to experience the events through Jefferies. The camera angles match his position (when he uses a camera&#146;s zoom lens to get a better view, we finally get the closer shots we’ve been craving) and the soundtrack reveals only what he could hear, burying his neighbors’ conversations in the ambient drone of city buses. The scenes are kept short and always end in fades. This has the effect of making the material seem abrupt and somehow unfinished, leaving us hanging on for more, as desperate as Jefferies for the next revelation. When he finally pushes past simple voyeurism and begins to act on his suspicions, the risks he takes on become our risks; our identification with him is so complete that moments that might have been nicely suspenseful jolts in a typical thriller become terrifying.

There’s also a dark, sexual undercurrent to the voyeurism. Much of the film concerns Jefferies’ unwillingness to settle down and marry his girlfriend Lisa. (And since Lisa is played by the impossibly beautiful Grace Kelly, one questions his sanity.) He fears domestication – though he claims it’s because their worlds are just too different for marriage to work – and the stories he watches in his neighbors’ windows come to resemble projections of all his worst connubial fantasies. His desire to watch overwhelms his desire for her, and he only really becomes aroused when she joins him in peeping. Hitchcock plays their relationship for laughs, but Jefferies’ voyeurism is clearly driven by his sexual insecurities. Rear Window sometimes has the appearance of a comic dry run for Vertigo, the film in which the sickness and obsession roiling just beneath the surface here come to the forefront.

Like Vertigo, the film’s success hinges on James Stewart. Stewart is a much misunderstood and too often underrated actor, remembered fondly as the stuttering, cornpone voice of the people in gushingly sentimental Frank Capra films. This is too bad, since his work is remarkable for its intensity and range. His early romantic comedies established his charm and poise, though in The Shop Around the Corner we see hints of flinty arrogance. In The Man From Laramie – the best of the series of westerns he made for director Anthony Mann – he’s shocking as a raging gunman with a penchant for grisly sadism. And in the torrent of schmaltz that closes Capra’s It’s a Wonderful Life, it’s easy to forget just how dark that film really is. Stewart is absolutely convincing as a despairing man driven to suicide by his failure to live up to any of his modest aspirations.

He peaked with Vertigo. His haunted, frightening performance stands with the very greatest in the cinema. Rear Window doesn’t aim quite so high. It’s a lighter film, one that sets out to entertain the audience rather than devastate them. Stewart’s work here is deft and intelligent, easily balancing the light comedy of his scenes with Kelly (and with Thelma Ritter as his nurse) and the darker scenes of rampant obsession. Long passages of the film are virtually silent, playing out solely on his face as he sits and watches. These scenes have a hypnotic fascination: he constantly surprises with his subtle intimations of anxiety and morbid interest.

There are no additional scenes or revisions in the new restoration, just an attempt to produce a copy faithful to that released in 1954. The film looks better than it has in decades, though some minor deterioration is evident. The original negative and sound elements are in great disrepair; the new version does the great service of stalling any further diminishment of the film.

More than anything, the restoration allows us a chance to see Rear Window in a theater. This is a film that demands the big screen. The witty apartment block set is diminished on television, since you simply can&#146;t see enough detail. And at home one loses the delicious thrill of sitting alone in a dark theater, lost with Jefferies in his obsessions, fearing what we might see and desperate to see it anyway. It&#146;s been a great year for films that both entertain and disturb. None of them comes close to Rear Window.