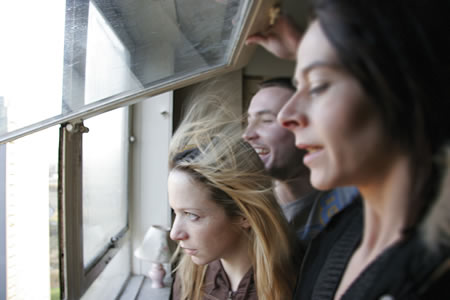 Written and Directed by Andrea Arnold

One of most parents’ most obnoxious refrains goes something like: "Honey, I’m setting these limits for your own good. Really, you’ll actually feel happier and more secure with these imposed restrictions." Well, that unwelcome parental wisdom is even more unwelcome in the film world. Independent producers and directors constantly bemoan the restrictions imposed on them by a lack of funds. And when they can, most of them bolt for the Hollywood studio, where the average movie budget is now $65 million, with another $33 million being spent on promotion. But then again, there’s Andrea Arnold and her first feature film- "Red Road."

A bit of background. In 1995, Lars Von Trier and three other Danish directors proclaimed a manifesto that would impose extreme limits on directors who accepted it. They argued that there was an emotional, ethical, and artistic truth to be found by creating art within these limits. For example, "Dogma 95" films could use no artificial light, no external music or soundtrack, the story could only take place in the present, they could shoot only on location and with hand-held cameras, etc. This was enormously restricting, and even directors who accepted these limits often compromised them. But the result was some of the most creative and powerful films of the past decade (Celebration, the Idiots, Reunion, Open Hearts, Brothers) Then two years ago Von Trier worked with two Danish writers (Lone Scherfig and Andrus Thomas Jensen) to propose a different kind of limit for filmmakers.

"Advance Party" was to be a joint project of Danes and Scots. Three very low budget films would be made in Scotland. Each would be helmed by a first time director. All three films would have the same actors playing the same characters. Their background and personality were defined by Scherfig and Jensen. But the specific story and other biographical details would be created anew in each of the three films. Andrea Arnold’s "Red Road" is the first of the three Advance Party films. And working within these severe restrictions, she has produced the richest and most complex English language film of the year- winning awards at Cannes and from BAFTA- the British equivalent of the Oscars.

"Red Road" opens with Jackie (Kate Dickie, in her first feature) working as a police-closed-circuit television surveillance monitor in Glasgow. Sitting in front of a bank of television screens, she can see everything happening in the streets of her sector, and even peer inside windows. It’s a notoriously poor neighborhood, and she routinely comes upon crimes in progress. She then alerts the nearest police, and there’s also now a video record of the felony and the felons. Jackie is lonely (apparently, she has lost a husband), routine-bound, lacking much joy in her life. Then one day she’s stunned to see Clyde (Tony Curran) on camera. Supposedly in prison for several more years, he has been released for good behavior. It would be wrong to reveal more of the plot. Suffice it to say that the rest of the film is a slow reveal of what he did to her and what she intends to do now.

This may sound like the setup of a sleazy-pseudo-feminist revenge fantasy. But Arnold won’t let us pigeon hole her film. Rather than looking like a genre thriller, she uses her tiny budget to give her movie the look of an adept documentary. Her cinematographer, Robbie Ryan, shoots the film with the same dispassionate eye of Jackie’s surveillance cameras. As for feeling like a feminist revenge fantasy, Arnold won’t let us settle there either. Each time we decide on whom we like and whom we don’t- a small and subtle moment demands rethinking these characters and recalibrating our emotional responses to them. We’re constantly re-adjusting to this film.

Arnold also keeps us off balance with her use of class. Growing up in a workingclass family and community (her mother became pregnant with her at sixteen), Arnold has no desire to romanticise or excuse the harshness and emotional brutality of this experience.. But again, whenever we think we know how to feel about this world, she gives it an added dimension or texture.

This ambiguous complexity extends most deeply to the character of Jackie. How are we to understand her desire to confront and interact with Clyde? At some level, she is looking for revenge. But we’re also aware of numerous, other psychological motivations. In interacting with and not harming him, she empowers herself. Moreover, there is perhaps a part of her that is genuinely attracted to him. And like us, she’s simply curious to find out more about this man. Her simultaneous attraction and repulsion gives us an unusually complicated window into her.

Speaking of windows, the French may be the masters of movies as meditations on the question of voyeurism, but Arnold more than holds her own. "Red Road" is a portrait of a voyeur, and it invites us to become voyeurs of the voyeur. We share her titilations, revulsions, and delights that come from observing while unseen. But while we share in her gaze, we also then place her in our gaze. Moreover, the cameras that reveal this Glaswegian neighborhood are an intrusion but also a benign one- peeping on others to keep them safe. It’s unsavory and admirable at the same time- more of Arnold’s complexity.

A few years ago, Lars Von Trier’s old mentor fell into a depression. So Von Trier suggested a challenge. His old teacher, Jorgen Leth, would remake "The Perfect Human"- a 12 minute film he had made 38 years before. He would remake it five times, with extreme constraints chosen by Von Trier- for example, in one version, no shot could be longer than half a second. Von Trier ended up raising Leth out of his depression and inspiring more artistic creation from him. Does this mean that our parents and Von Trier are right about the salutary nature of limitations? I’m not sure about my parents. I’m quite sure that Andrea Arnold’s "Red Road" is testimony to how limits helped liberate her own limitless talents.