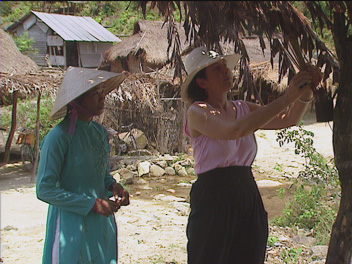 Thirty years after the death of her husband in the Viet Nam war, Barbara Sonneborn creates a tribute to his memory in a documentary film, Regret to Inform. It would be easy for the sophisticated viewer to glibly label Regret to Inform an antiwar tract, but an implicit point of the film is that we need all the antiwar tracts we can get. And "tract" somehow doesn’t allow for the sincerity that infuses the film and the genuinely felt emotions expressed.

Sonneborn loosely structures the movie on a journey she took to Que Son, where her husband was killed. Repeated shots of her and her interpreter on a train running through the Vietnamese countryside are interspersed with talking heads of both American and Vietnamese widows reflecting on their losses and their husbands’ lives. There is stunningly beautiful footage of the landscape: craggy mountains with that particularly Asian profile – like Chinese watercolors – shrouded in haze from the steamy humidity; a large bamboo water wheel on the side of a river; impossibly green rice fields with borders of palms; the oar of a boat sluicing through brownish water. There are glimpses of poor rural villages and urban scenes as well. Sonneborn also uses a good deal of carefully selected stock footage from the war itself – tanks, helicopters, bombers, bombing, fire, disfigurement, and death.

The film is not an unqualified triumph. The war scenes, real and occasionally horrifying as they may be, seem almost antiseptic, distanced, missing the grittily intense impact they should have. (Have we become too jaded by Spielberg and Coppola and Malick?) And Sonneborn herself remains coolly aloof, her own commentary carefully underplayed. When she arrives in Que Son, the event itself seems anticlimactic, of more intrinsic interest to her personally than any point it makes for the movie. Indeed, her own monologue on reaching the area where her husband was killed offers only rather banal cliches; it detracts, rather than adds to her achievement here.

The achievement is in the statements garnered from the widows on both sides. These women speak from their hearts and their honesty fills the screen. Some are more articulate than others, as would be expected, but each adds a dimension to understanding the pain and suffering that the war brought, pain and suffering that does not go away. "Nothing is black or white. It’s all gray, just like the smoke [of burning houses]," one woman says. Another expresses the social constraint, "Vietnamese women are not supposed to cry." But, in the end, a woman who has been through extreme loss and degradation, anguishes: "I am ashamed to cry. What makes my pain greater than my neighbors’?"