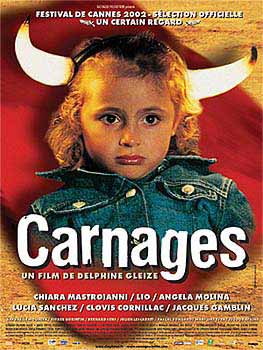 Among New York City&#146;s annual cinephilic events, only the New York Film Festival and the New Directors/New Films series gathers more attention than The Film Society of Lincoln Center&#146;s &#147;Rendez-vous with French Cinema&#148; program at the Walter Reade theater. From the very beginning with the Lumieres, France, has had as rich a film history as the U.S. and every new generation brings its own notable talents. This year, the theme seems to be out with the old, in with the new. Among the few veteran filmmakers in the line-up, only Olivier Assayas and Benoit Jacquot have any sort of wide prominence today. (So as not to worry the Francophiles, Claire Denis and Gaspar Noe&#146;s most recent efforts will receive U.S. releases imminently.)

Two of the best films in the series, Carnage and C&#146;est le bouquet, are ensemble pieces whose many characters are often linked in only the most tenuous fashion.In Carnage, those links are supplied primarily by a bull named Romero. Romero gores bullfighter Victor (Julien Lescarret) sending him into a coma (echoes of the recent Talk to Her). Preadolescent Winnie (Raphaelle Molinier) has a big black Great Dane, Fred, who gets one of Romero&#146;s bones as a doggie treat; Winnie&#146;s teacher, Jeanne (Lucia Sanchez), and her mother, Alicia (�ngela Molina), observe Romero&#146;s carcass being hauled away; struggling actress Carlotta (Chiara Mastroianni) sells Winnie&#146;s parents Romero&#146;s bone; former philosopher, now aspiring skater Alexis (Clovis Cornillac) witnesses an accident involving Carlotta&#146;s car; enormously pregnant Betty (Lio) is wife to Jacques (Jacques Gamblin), a scientist who studies Romero&#146;s eyes; and finally, middle-aged Luc (Bernard Sens) who collects and sells preserved animals gets Romero&#146;s horns as a gift from his kleptomaniac mom, Rosie (Esther Gorintin). The structure of Carnage has a resemblance to that of Short Cuts and the thematic exploration of The Hours, but with its mysterious, surreal style, it is more of a visual poem than a real narrative with characters pursuing set goals. Carnage is striking as director Delphine Gleize&#146;s debut feature. It brims with meticulous widescreen compositions and memorable images &#150; a dog shedding a tear, an injured matador and a dead bull being dragged off together, an old woman ambling over train tracks, and a corpse encircled by flocks of white ducks and rabbits. But it also suffers from pretension in its schematic contemplation of life and death, its theme of animals as commodities, and its every-woman-hides-a-secret parallels.

C&#146;est le bouquet (aka Special Delivery) is much lighter. For an initial, brief moment, it threatens to be one of those French roundelays of illicit romances, but the film turns out to be quite the opposite &#150; a transformation of banal everyday trifles into a charming delectable romp.It has an amazing cast filled with faces of unconventional beauty, which also describes the movie itself.Emmanuel Kirsch (Richard Debuise) gives married Catherine (Sandrine Kiberlain) a bouquet of flowers as an apology for calling her too early in the morning after no contact for fifteen years. At the same time, Catherine&#146;s husband, Raphael (Jean-Pierre Darroussin) gets fired by boss Stephane (Mathieu Amalric). The two events together spiral out of control to involve nosy neighbors Antoine (Maurice Benichou) and wife Alice (Helene Lapiower), Raph&#146;s horny co-worker, Edith (Dominique Blanc), playwright Robert (Jean-Claude Brialy), and his live-in partner Laurent (Dominique Besnehard).The cast is truly all-star, collecting some of France&#146;s best and brightest actors. Just looking at Amalric (My Sex Life), France&#146;s answer to Steve Buscemi, is funny. And how Darroussin (Marius and Jeannette) can hold so much screen presence while looking like a schlub is a minor miracle.There are teasing lessons in geography, political correctness, and corporate politics to be had amid the amusing word play and comically absurd situations.While the film pokes fun at French obsession with intellectualism, it is seemingly pure, delightful fluff until a touching ending that reveals the human need to reach out that started it all.Writer-director Jeanne Labrune&#146;s choice of some classic Philip Glass (Dance VIII, Akhnaten) along with Bruno Fontaine&#146;s Poulenc-like score give the movie that extra oomph.

Another comedy, Monique, is proof that French farce can be just as idiotic as American ones. The story is of a despondent and aloof family man, Alex (Albert Dupontel), who falls for a state of the art sex doll after his son leaves for school and his wife, Claire (Marianne Denicourt), starts cheating on him. Replace all realistic human psychology with lame contrivances, and somehow the $6,000, silicon-molded 34E-22-35 &#147;Monique&#148; rejuvenates Alex&#146;s life and that of all those around him. For much of the film&#146;s length, writer-director Valerie Guignabodet&#146;s style is naturalistic.Only when she brings out the outright wacky in the last quarter of the film does it pick up as tone finally meshes with content.Denicourt wielding a rifle and her first meeting with Monique are easily the movie&#146;s highlights. Exactly how the uniquely sexy Denicourt (La Belle Noiseuse) has been so quickly relegated to playing a middle-aged mother with a son in his late teens is as much a mystery as why a man would prefer a sex doll to her.

Paul (Sami Bouajila) spends the entirety of Life Kills Me (Vivre me tue) swimming upstream. Born into a middle-class Moroccan immigrant family and nabbing a Masters degree with a thesis on Moby Dick, Paul scrapes out a living delivering pizza while failing every professional job interview he gets. His close brother, Daniel (Jalil Lespert), fares no better.Having a body three sizes too big for his rectangular head, goofy, dim-witted Daniel has no self-discipline except when it comes to body-building, an obsession to match Paul&#146;s amateur boxing hobby.Not a terrible lot happens in terms of story or character and director Jean-Pierre Sinapi shoots every event, major or minute, with the same level of bland intensity. But the main problem is that every single supporting character from girlfriend Myriam (Sylvie Testud) to cabby pal Diop is more interesting than protagonist Paul.Testud (La Captive, Murderous Maids) is especially outstanding.She has one of the most distinctive faces in all of cinema.A large fleshy nose gives extra character to her ferret-like cuteness.She displays a casual childlike vulnerability on the surface but harbors a slow-baking mixture of complex emotions underneath. Testud&#146;s mighty presence sucks up attention like a black hole in every scene she&#146;s in.

Olivier Assayas (Irma Vep, Late August, Early September) has divided audiences in festivals around the world with his latest, Demonlover, a film about corporate savagery, anime (Japanese animated) porn, and bondage/domination. Set in Paris, it has a colorful cast in Danish-born, now American actress Connie Nielsen (The Devil&#146;s Advocate, Gladiator), Americans Chloe Sevigny and Gina Gershon, and Frenchman Charles Berling.Assayas, known for his vivid character-driven work, may just be experimenting by going in the opposite direction after the period-piece epic Les Destinees, but corporate espionage thrillers are just not his genre. Ultimately the movie is not as provocative as its subject matter and Assayas couldn&#146;t film an action set piece to save his life.