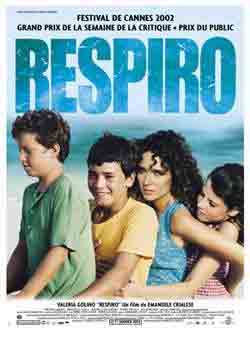 Respiro takes place on the Italian island of Lampedusa (closer to Tunisia than it is to Sicily). Writer/director Emanuele Crialese captures such a strong sense of place that the island should share top billing with the actors. In the film it seems isolated (with its own local dialect); its dry desert-like soil, craggy cliffs incised with caves, and abandoned half-finished cinder block buildings are surrounded by the impossibly blue waters of the Mediterranean.

The key character is Grazia (Valeria Golino), the beautiful, free, almost childlike mother of a teen aged daughter, Marinella (Veronica D’Agostino), and two younger sons, Pasquale (Francesco Casisa) and Filippo (Filippo Pucillo). She works in the cannery; her husband, Pietro (Vincenzo Amato) is a fisherman. They are a close, loving family, and the spunky sons are protective of their mother and sister.

But Grazia is wildly erratic–more so, it appears, than merely a free soul acting out. Her mood swings seem indicative of a bi-polar disorder, manic-depressive in nature. It’s one thing to take a nude swim with your sons (verboten in this conservative community); it’s quite another to free an entire kennel of dogs to run loose on the island. The townspeople are concerned and pressure Pietro to send her to Milan for treatment. With Pasquale’s help, she hides, and Pasquale plants evidence to make it look like she drowned.

Save for the conclusion that follows, that is the essence of the story line. It’s a bit thin and Crialese’s minor excursions into magical realism seem somewhat timid, and, indeed, unnecessary. He successfully creates a warm and individualized group of characters and a palpable sense of both family and community ties in this insular environment. In a lovely scene, a neighbor complains to Pietro that Pasquale has injured his son. Pietro asks if the neighbor wants to punish the boy, but the neighbor says no–you do it. The mild whipping happens and then the neighbor and his son join the family for a drink.

There are scenes that show the boys trapping birds (to be roasted and eaten), diving for sea urchins, and sorting out the catch from the nets on Dad’s boat–they know all the varied fish by name, like old hands. The boys trade fish for chances to win prizes from a local vendor. A win becomes a major occasion. There’s a charming, but ever-so-slight, courtship between Marinella and a new young policeman in town. None of this directly relates to the central storyline, but the characters are so endearing and the texture of their lives is so perceptively caught that there is pleasure in simply participating as an observer.

The downside is the skeletal storyline, which doesn’t propel the action forward with sufficient potency. And Crialese’s ending, rather than being profound or genuinely poetic, seems forced; it’s as if he had nowhere to go with the situation he set up and, in this case, ambiguity seems a weak escape rather than a meaningful enhancement. If fable and fantasy were the director’s goal, he didn’t lay a strong enough foundation earlier on to carry the tone through the conclusion with conviction.

Still, it’s nice to have spent some time with these eminently likable characters and Crialese’s skill with his actors and his mise en scene promise strong films to come.