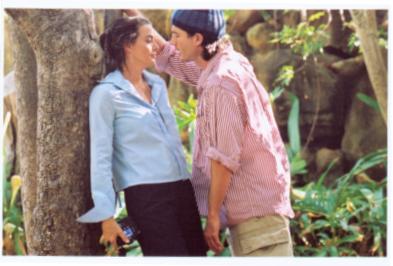 Though they cloak it in irony, there’s little to dispute in the goals of the Lars von Trier and Thomas Vinterberg manifesto known as "Dogme95." Fed up with the overblown productions and thin content of late 20th century filmmaking, they promulgated The Vow of Chastity, a set of rules for making movies that focus on character and setting on the one hand, and discard the usual grab bag of technological tools on the other–studio shooting and musical sountracks are out, hand-held cameras and location shooting are required.

To date some two dozen films have earned the Dogme95 seal of approval, including at least a few worthy of note (The Idiots, Mifune)and a few that, if less than fully satisfying, at least earned some degree of respect from culturevulture.net reviewers (Julien Donkey-Boy, The Celebration). But casting aside technology is no guaranty of a good movie any more than an accretion of technology need necessarily result in pap.

Reunion is a new Dogme film, proudly carrying "Dogme #17" under its title. This one is an American production, in English, and it has the characteristics expected: a jouncing hand-held camera and a poorly recorded soundtrack.

The premise is straightforward. Seven classmates converge on their hometown (Ojai, California–a town near Santa Barbara, population 7,862) for the occasion of their 20th high school reunion. An early scene of one of them driving through the countryside on his way to the event is a reference to The Celebration and, indeed, the whole setup is a variation on The Celebration in which the gathering is a family reunion. The kinds of things that happen are to formula–there will be the high school reject who made good, the golden boy who didn’t, the marriage falling apart, the school slut who is the popular (and frenetic) mayor, the successful army officer who has just come out as gay. There will be some sex, some drugs, some scandals revealed.

This isn’t, in and of itself, a bad premise, and no doubt a good movie might have been made from it, but Reunion falls short on just about every count. To create seven characters of any depth in a 90 minute film takes deft direction, an insightful script, and players who can flesh out the lines with the nonverbal language that is the hallmark of good acting. Only Billy Wirth (Space Marines, Me and Will), as the most likely to succeed who didn’t, seems to inhabit his role, offering an unstated hint of underlying reasons for the way things turned out for him–reasons never broached by the script. Jennifer Rubin as Jeanie, the high school reject who has become a world-traveling photojournalist, is convincing as neither. Her history is never explained, just a given ("the biggest loser of 1981") and her acting is stiff and by rote; the character is merely an idea that fits the construct. It doesn’t help to build the sophisticated, successful image by mispronouncing "Provence" either.

Marlene Forte, who was fine in Our Song, plays the mayor on one frenetic note throughout; similarly Rainer Judd as the abandoned wife comes off like a Goldie Hawn wannabe with overactive tear ducts. Dwier Brown (Field of Dreams) is dignified as the gay army officer, but his delayed rebellion doesn’t have any real fire. It was neither helpful nor amusing to gratuitously write in a role for a smarmy and intrusive gay waiter ("We have a lovely array of draughts."), presumably there for contrast. And Corey Glover (Platoon) is sympathetic, but the script gives him no place to go.

The corn flies off the screen with sufficient regularity feed a herd of Holsteins: "There’s beauty in sadness." "You know, you don’t even know me." "How could you be gay in the military?" "It’s called mid-life crisis."

First time director Leif Tilden cannot be faulted individually since Dogme films are not allowed to credit a director. So the blame must lie with the entire cast and crew, especially the misguided producers who intiated the project. Dogme or no Dogme, a good movie needs some fresh ideas, believable characterization, and dialogue that doesn’t stimulate repeated wincing. Reunion scores on none of the above and only hangs onto Dogme as an excuse for a low budget and lousy production values