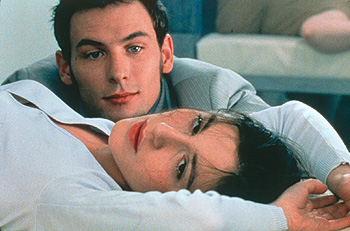 Catherine Breillat&#146;s Romance opens in mid conversation: Marie (Caroline Ducey) is reacting to the news that her boyfriend Paul (Sagamore Stevenin) no longer wants to have sex with her. Paul doesn&#146;t end the relationship; narcissistic and listless, he just unilaterally changes its rules. But the change is enough to shatter Marie&#146;s illusions about the nature of romance, and it sends her on a sexual pilgrimage in which she tries to reconcile her emotional yearnings with the nature of male sexuality. She picks up a man in a bar (Italian porno star Rocco Siffredi) who, in contrast to Paul, can offer her nothing but sex. The plain-faced, aging principal (Francois Berleand) of the school where she teaches turns out to be a kindly master in bondage. An anonymous man on the street turns a casual sexual encounter into a ritualistic punishment.

These trysts reflect on and enlarge Marie&#146;s understanding of gender relations, but they also force her into a quixotic attempt to keep her relationship with Paul intact. The contrast between emotion and carnality, and the tensions created within Marie by her double-life, are reflected in a variety of symbols, such as the gaping hole in a fence that she and Paul pass through while taking a walk, or the strand of hair that often bisects her face. Her bifurcated existence is most fully expressed in her fantasy of being trapped at the waist inside the wall of a bordello, leaving her defenseless against the sexual abuse of unseen strangers.

Marie&#146;s encounters go far beyond what we&#146;re used to seeing in movies. Ducey is seen fellating two of her lovers; in close-up the principal&#146;s fingers penetrate her vagina and bring forth a drop of her lubricant for our examination; and highly realistic simulations of vaginal and anal intercourse punctuate the action. Breillat&#146;s sense of proportion keeps this combustible material in check, so that even things like the long-held shot of Siffredi&#146;s erect penis, glistening inside a condom like an oily popsicle, can&#146;t overwhelm her story. It also helps that the film has a sense of humor about its subject, as when the shot of a penis ejaculating on Marie&#146;s stomach cuts to drops of ultrasound gel being squirted across the same part of her body like a string of diamonds.

Obviously Ducey is asked to stay in character through scenes that few legitimate actresses have ever been asked to perform. (Maruschka Detmers is the only other candidate who comes to mind, but Romance makes even Devil in the Flesh look tame.) Ducey&#146;s Marie can be naive to the point of seeming otherworldly, but she has a kind of feral instinct when it comes to sex that makes her thoroughly present when she&#146;s dealing with men. And Ducey has a sly way of communicating the child-like deliberateness of Marie&#146;s actions: at one point the look in her eye and a slight curvature of her wrist make it clear that she&#146;s going to go down on Paul before she actually does so.

Because of its sexual content, Romance is being compared to Last Tango in Paris and In the Realm of the Senses, but its microscopic focus on a single character&#146;s psychological state ties it to films such as Cleo From 5 To 7 and Repulsion. We see all of the external events in Marie&#146;s life, but their real importance lies in her interpretation of them. Her voice &#150; by turns ruminative, accusatory, banal, lost &#150; compulsively distills everything she&#146;s feeling throughout the film. Romance&#146;s impatience with the dross of daily existence makes it a very feminine film, and like the movie, Marie wants to get on with what&#146;s important in life. Her outlook may often be stunted but she doesn&#146;t have time for nonsense, not even that which is of her own making.

Between its sex-play and Godard-play, Romance is clearly not for everyone. Much of it doesn&#146;t seem to be working while it&#146;s happening on the screen. Its distancing techniques push it toward monotony in places, and some of its characters seem caught in a nouvelle vague vapor lock. But the final two minutes arrive like a thunderclap, and in a flash it becomes clear that Breillat was taking care of Marie all along: she allows her to find love in a place where Marie had never thought to look for it.