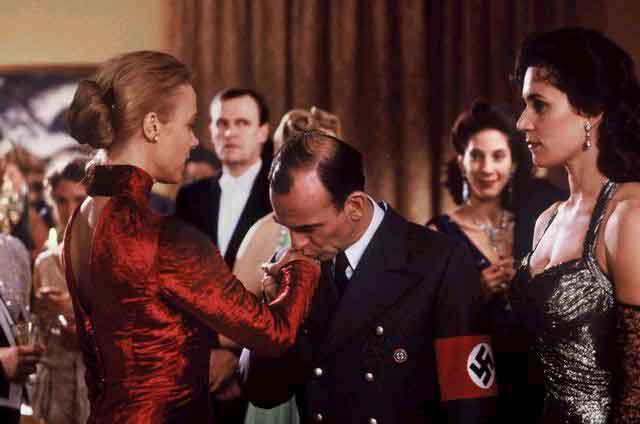 In early 1943, a group of women began to gather outside a detention center on the Rosenstrasse in Berlin. They were "Aryan" wives of Jewish men who had just been arrested after years of being systematically disenfranchised. The Rosenstrasse prison was the last stop before Auschwitz; their vigil was a desperate attempt to save their husbands from the death camps.

From its opening scene – headstones in a Jewish cemetery piled with pebbles, underscored by melancholic strings – Margarethe von Trotta’s Rosenstrasse seems to be this year’s white elephant Holocaust film. Lulling the audience to expect yet another attempt at rendering unfathomably monstrous crimes as tasteful, uplifting chamber drama, Rosenstrasse upends these expectations once the story begins.

Ruth (Jutta Lampe) is an elderly New Yorker who emigrated from Germany as a child in the Second World War. Staring directly at the camera, devastated and enraged, she covers the mirrors and television set in her elegant apartment in preparation for sitting shiva, the ritualized Jewish mourning period, for her husband. The mournful spell is broken when Ruth’s daughter, Hannah (Maria Schrader), takes her to task for her sudden interest in Jewish observance. It’s bad enough that Ruth demands the traditional thirty days of mourning for her irreligious husband; when she insists that Hannah’s gentile fiance Luiz (Fedja van Huet) – the dead man’s beloved protege – leave the apartment and that the wedding be called off immediately, it’s clear that something is desperately wrong.

Ruth won’t acknowledge any change in attitude. She simply insists that her husband will be mourned as a Jew, and that Luiz is no longer to be trusted. When an elderly stranger appears at the apartment to comfort Ruth, she’s curtly sent to the street. Hannah follows her, and finds out just enough to send her to Berlin in search of the story her mother refuses to tell.

She soon learns that Ruth was saved during the war by a gentile woman named Lena Fischer, who was married to a Jewish musician. Hannah tracks her down, posing as a historian writing about intermarriage under the Nazis. Lena, never suspecting that Hannah is an interested party, begins to recount her war years, shown in intricately structured flashbacks that juggle chronology and continually broaden the implications of the scenario.

The young Lena (Katja Riemann) was an aristocrat, a concert pianist whose father, a Baron sympathetic to the Nazis, disowned her when she married Fabian Israel Fischer (Martin Feifel). Under the Nuremberg laws, their marriage is illegal. All attempts to help her husband are answered with a curt reminder that she has the right to divorce him. He is able to remain in Berlin, but they lose everything. His promising career ended, he works as factory labor until he is finally arrested in a sweep that captures a number of the few Jews still in the city in 1943. Among them is Ruth’s mother.

Ruth, a nervy eight year old, is stranded now. She forces herself into Lena’s care, and they begin to participate in the Rosenstrasse vigil, aided by Lena’s brother Arthur (J�rgen Vogel), just returned from Stalingrad. Protest under a regime involved in systematic genocide is reckless, of course, but the women have little left to lose at this stage. And as Lena recounts the tale to Hannah, new facts emerge, muddying the emotional waters.

Von Trotta’s employment of constant movement between time frames guards against melodrama; there’s a constant reevaluation of the events, a testing of the claims of the past against the reality of the present. This structure adds distance, as does the flat, measured pace and predilection for symmetrical compositions. The film aims for a calm, unblinkered look at the enormity of the crimes without the shock effects and horror film mechanics that Holocaust films fall into all too often. When the story closes, the tears it has generated feel earned rather than forced; it’s as good a fiction film on the subject as can be imagined.