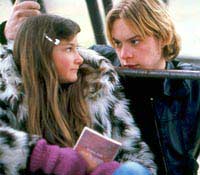 Aranka Coppens, a natural on the screen, plays 13-year-old Rosie, a Belgian girl whose vivid imagination holds our interest throughout this intense and lovely film. Rosie is trying to make sense out of her life and Patrice Toye’s debut direction helps make us care. We want to help Rosie get to the bottom of things. This is a small film about big subjects – disaffection, depression, incest, and the power of the mind both to cloud and to heal.

One look at this little girl who is trying to act so much older, in her fur coat, gloves, miniskirt and roller skates, and we see someone wrestling with her self-image. Her family is a strange one, and it takes us awhile to realize why Rosie is as unsure of her place in it as she is. As she dances alone in her living room to blaring English pop on the stereo, we see ourselves at her age, using volume to drown out the voices in our heads.

And Rosie does hear voices. We are never sure what is real and what is Rosie’s imagination in this film. Particularly interesting is Rosie’s relationship with her boyfriend Jimi (Joost Wijnant), which makes even more sense after the surprise ending. Once again, when Rosie and Jimi kidnap a baby girl and name her Elvis, we see Rosie desperate to be more mature but unable to pull it off very well.

Excellent performances are turned in by Sara de Roo as Rosie’s mother, Irene, and Frank Vercruyssen as uncle Michel . The tension between Michel and Irene is one more point of stress in the film, which drives Rosie to find her Jimi. The story is told in a series of flashbacks, beginning with Rosie being asked by a social worker: "Are you sorry for what you did?" "No," she answers. "Why don’t you tell me the truth?" the social worker asks, and Rosie shakes her head and answers: "You wouldn’t believe it."

The real story is not that strange, but Rosie’s place in the puzzle is. The character of Rosie is involving, more so than the story itself, which is somewhat predictable. Whether in her stolen white cowboy boots, or walking the baby Elvis through fields of reeds, or climbing on the dangerous abandoned refinery, Coppens, barely 13 at the time of shooting this film, makes us feel her confusion. The bleak Belgian countryside, cold and empty, serves to heighten the discomfort.