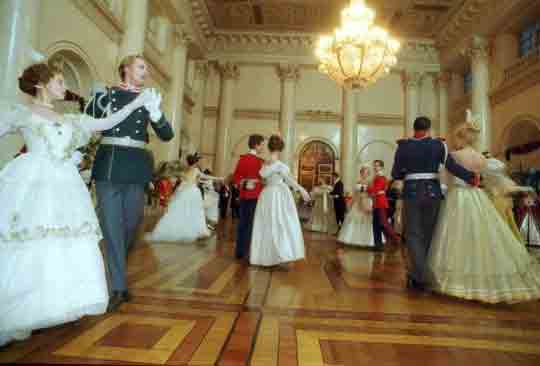 Russian filmmaker Alexander Sokurov is an art film heavyweight lauded by critics for daring to bore them. In most cases, he succeeds. His style is one of stately paced, painterly imagery. That translates as, &#147;pretty to look at, maddeningly slow.&#148; More concerned with mood than narrative, Sokurov&#146;s movies consist of long takes of photographic impressionism. Several of his films are characterized by an interest in history and historical figures. Moloch features Adolf Hitler and Eva Braun as protagonists, and Taurus looks at the Lenin&#146;s final days. Russian Ark fits Sokurov to a tee. The entire movie takes place in St. Petersburg&#146;s State Hermitage Museum and the gimmick this time is that all of its 96-minutes is shot in one single take. Russian Ark could be exhibit A for Manny Farber&#146;s white elephant art, that is, movies that try too hard to be masterpieces.

Ostensibly a tour of the museum as well as through tidbits of Russian history, Russian Ark features a French diplomat, the Marquise de Custine (Sergei Dreiden), accompanying an offscreen character (voiced by Sokurov) through the museum. Throughout, the audience shares this unnamed character&#146;s point of view embodied by the camera.Going from room to room, they also leap through time, observing 18th century aristocrats engaging with an opera or attending affairs of state or passing present-day museum-goers perusing the works of Rubens and Van Dyck. They discuss Peter the Great, Italian influence on Russian art, and El Greco. Occasionally the Marquise stops to smell the paintings and talk with bemused patrons.It all ends at a huge, elaborate ball where hundreds of ornately dressed aristocrats waltz to the music of a great orchestra.

With the movie composed of a single shot, principle photography may have required a single day, but postproduction becomes a nightmare. Russian Ark required months of rehearsals to get the logistics and timing just right for the 867-member cast.Shooting on high definition digital video, Sokurov circumvents the limitation of 10-minute film magazines; on the other hand, HD DV has its shortcomings. Russian Ark is often dimly lit, and while director of photography Tilman B�ttner escapes a lot of video snow and retains good clarity and decent resolution, the image is not nearly as sharp as on film and the colors are noticeably muted. Some of the lighting is also poor as light bouncing off the canvas often blinds the viewer to the painting&#146;s details.Statues like Antonio Canova&#146;s The Three Graces thus fare better than the oils in gaining appreciation.

Insofar as the tour aspect is concerned, the constant mumbling between the Marquise and the viewer&#146;s surrogate is irritating and distracting.The Marquise is constantly engaged in heavy breathing and gasps of awe, while the offscreen visitor continually questions where he is, when he is, who are the people before them, and so on. Watching Russian Ark may be like going to the museum except the two fey tour guides lack any real insight.It also plods with a tediousness associated with entering the fourth hour at a museum when feet are sore and eyes are ready for the outdoor sun.The historical set pieces have the flavor of attending a costume party lacking any frivolity.Attempts at whimsy feel either so calculated as to be lifeless or just plain odd as when two men blow air at each other.Two thirds of the way in, the Marquise mutters, &#147;A terrible boredom will set in,&#148; which is true except his description is thirty minutes off the mark.