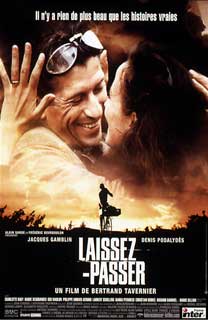 Bertrand Tavernier&#146;s brilliant new film, Laisser-passer pays homage to film-making during the Nazi occupation, a time often considered to be France&#146;s Golden Age of cinema, best remembered for such masterpieces as Marcel Carne&#146;s Les Enfants du Paradis and Les Visiteurs du Soir. The movie showcases the turbulent, challenging lives of two minor figures in the industry: the dissident screenwriter Jean Aurenche (Denis Polalydes) and the assistant film director Jean Devaivre (Jacques Gamblin) who, when he wasn&#146;t helping to direct such war-time classics as La Vie de Plaisir and Au Bonheur des Dames, was risking his life for the French Resistance. Tavernier’s title, which literally alludes to the special pass for after-curfew hours when many films were made, also alludes to the laissez-faire atmosphere of the movie industry during the war, where many legal trespasses were overlooked in favor of great movie making.

Most of the action takes place either around the offices or on the set of the German-owned Continental, the most powerful film company in Paris during the Second World War. Although the Nazis relied on the French press and radio to be tools of propaganda, when it came to filmmaking, they gave French directors and screenwriters such as Jacques Tourneur, Henri-Georges Clouzot and Charles Spaak much more leeway. What mattered was to keep the French entertained, rather than informed. While the films were submitted to the Nazi censor, many retained veiled criticism of the Vichy regime and the Nazi occupants, particularly in Clouzot&#146;s Le Corbeau which attacked the racism of a small town in France, and Carne&#146;s Les Visiteurs du Soir, in which men are turned into stone, an apt metaphor for the times. Some of Laissez-passer&#146;s most affecting moments have to do with the noble struggle of maintaining some artistic integrity and decency at a time when all the odds were against the French.

What is remarkable and affecting about Tavernier&#146;s film is that while showing how the French film industry attained heights of great art despite shortages of food, fuel, and electricity, along with the threat of night bombing, it also provides a gritty and realistic picture of France under the occupation, showing how its people often played a duplicitous role in order to keep their heads high. While some were willing to work for the Continental, many were reluctant to put their name to any contract, while others went to certain lengths to employ the few talented Jews who hadn&#146;t been deported or who had, by hook or by crook, managed to escape to safety.

Tavernier shows the Paris of the occupation, with its stores plastered with signs indicating their former Jewish owners, with people hurrying from lodging to lodging (including a whorehouse) in search of warmth and safety, or others, less fortunate, packed into French city buses on their way to the Drancy internment camp, their coats and jackets, patched with the humiliating yellow Jewish star. Tavernier doesn&#146;t settle for facile costume drama&#151;he succeeds in bringing back an era that most of the French would prefer to forget. Here you can smell the sweat of fear, you can feel the unheated, grungy rooms, and almost touch the gaunt, underfed face of Paris.

Yet, Laisser-passer is replete with the period&#146;s contradictions, whether it&#146;s the Vichy factotum who works for the Resistance, or the German intellectual at the Continental who cares more about making the best films with the best talent available, rather than enforcing Nazi legislation banning Jews from work. In every frame that unfolds there’s a sense that everyone is trapped in an unholy war that, even its most crushing and demoralizing moments, also reveals glimpses of ordinary human kindness.

In one instance, the director Richard Pottier insists that the Germans release the Jewish screenwriter Charles Spaak from jail so that he can write the film&#146;s script on the set. When Spaak returns to the set, the entire crew bands together secretly to give the starved detainee some white wine from Pottier&#146;s stash and a lobster claw that had been intended for a scene in the film. In another scene, an outraged Aurenche berates his black marketeer host (who has just fed him a lunch of oysters, champagne and foie gras) for taking delight in beating an old Jewish man. Realizing that Aurenche may be risking the same fate as his host&#146;s Jewish victim, his girl friend promptly knocks him out cold, thus putting an end to his dangerous outburst.

The film&#146;s superb ensemble cast masterfully succeeds in presenting a riveting microcosm of France during the occupation, showing how often. through hardship, people can achieve true grandeur that has nothing to do with &#147;La Gloire.&#148; By turns gripping, amusing, tender and heart-wrenching, Laissez-passer has all the earmarks of French cinema at its best. Tavernier&#146;s film-making mentors from the Forties would laud and applaud him today.