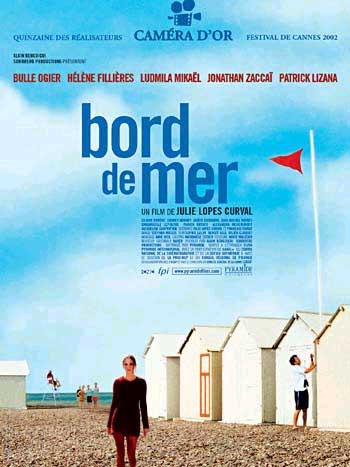 Everyone has been on a bad summer vacation someplace like this. Many have lived their entire lives in a place that resembles it. Filmed along the real-life Bay of Somme, the once-grand fictional seaside resort town Cayeux is perhaps the most complex and larger-than-life character in the ensemble cast of characters that makes up Seaside. Critics have noted first-time director Julie Poles-Curval&#146;s proclivities to Chekhovian bittersweet melancholy (think cherry orchards, without the looming real estate developers) and Edward Hopper&#146;s visual language of sparse, brightly-lit, and eerily empty landscapes. Pole-Curval&#146;s ability to quietly understate the dramatic unfolding of the universe is simply breath-taking.

Poles-Curval weaves together the tangled lives of a richly nuanced cast of characters, both local year-rounders and summer vacationers. Marie (Helene Fillieres) works in the local pebble-sorting factory and lives with Paul (Jonathan Zaccai), who is a lifeguard in summer and a grocery clerk during the winter. Marie does not suffer well living in the shadow cast by Cayeux&#146;s faded past, and falls in lust with the local scion, Albert (Patrick Lizana). The town has fallen on such hard times that the family-owned factory must be sold to a corporation. Tourist life at the beach and in the town&#146;s casino quickly fade to background, as it becomes clear that real life is measured by being on or off work sorting pebbles at the factory.

Albert&#146;s father had also strayed over social class lines, having married the factory worker Odette (Liliane Roveve). Odette makes an unexpected and disturbing return to Cayeux from London, where she has made her home since her husband&#146;s death, and resumes her girlhood friendship with Rose (Bulle Ogier), Paul&#146;s mother, who has now gambled away all her assets at the local casino. Complications ensue for everyone.

The holiday-makers include a fashion photographer (representing to the townsfolk a fleeting brush with past glamour), his father and his mother Anne (Ludmila Mikael). Anne fails miserably in trying to strike up personal acquaintance with any locals, perhaps a taste of reverse snobbism a la Cayeuse? It is through her eyes the movie-goer enters this world &#150; it is Anne who, in the film, finally notices the omnipresence of the pebble-sorting factory, the sharp class divisions between locals and tourists. Through Anne too, the inexorable grinding of stones, washing of stones, characters walking over, kicking, picking up, drowning in stones, emerges.

Perhaps because of the inevitable association in the minds of American movie-goers with the cartoon character from The Flintstones, the film’s original English distribution title, Pebbles, was replaced with Seaside. &#147;Seaside&#148; calls to mind English holiday resort towns, while &#147;Pebbles&#148; invokes a major metaphor of the film. The eponymous pebbles are, however, actually the size of rather large stones, or rocks. The grating and gyrating, wear and tear, and seemingly permanent immutability, with no visible sign of wear all suggest the larger, darker &#150; and yet also joyful &#150; machinations below the surface. Poles-Curval balances the banal with the sublime in this simply remarkable and very French film.