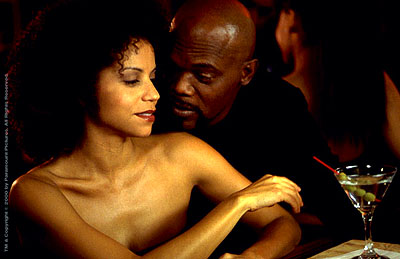 Here comes the NYPD’s worst nightmare. Hot on the heels of the uproar over Bruce Springsteen’s "American Skin" (New York’s Finest are boycotting the Boss’s string of Madison Square Garden dates over the song inspired by the Amadou Diallo shooting), here’s Shaft, featuring Samuel L. Jackson as an ex-cop popping caps into a couple of corrupt boys in blue as he announces, "It’s Giuliani Time!" Looks like it’s going to be a long hot summer in Gotham.

Shaft is, of course, an update of the 1971 hit that kicked off the blaxploitation craze. Remembered now mainly for the classic Isaac Hayes theme song, the original film was more effective as an exercise in iconography than as a movie. Richard Roundtree’s John Shaft was a badass superhero in a mean leather jacket, with what must have been an incredibly refreshing attitude problem towards authority figures – especially white ones. In the new Shaft, Roundtree reprises his role as the black private dick who’s the sex machine to all the chicks, though his performance amounts to little more than a cameo. Instead, the baton is passed to John Shaft’s eponymous nephew, an NYPD homicide detective played by Jackson.

Director John Singleton (Boyz in the Hood, Rosewood) would likely have been run out of Hollywood on a rail if he hadn’t been smart enough to retain the signature chicka-wacka-chicka-wacka title tune, which meets with instant audience approval as it appears over the Paramount Pictures logo. But the original movie’s most memorable moment, Shaft‘s opening credits stroll through a Times Square brimming over with seedy atmosphere, has been jettisoned in favor of a 007-like impressionistic montage. (It’s just as well – the image of Samuel Jackson striding purposefully past a Disney Store probably wouldn’t have the same effect.) This sequence features a Jackson body double getting it on with an anonymous female in near-subliminal shots that constitute the only nookie in the movie. So much for being the sex machine to all the chicks.

In fact, this Shaft isn’t even a private dick, at least not at first. He’s a cop investigating the killing of a black patron at a trendy bar. The only witness to the crime is bartender Diane Palieri (Toni Collette), who tells Shaft of a confrontation between the victim and racist white college boy Walter Wade (Christian Bale), a well-connected scion of the city. Wade posts bail and skips the country, but when he returns two years later, Shaft is waiting at the airport to nab him. Before posting bail yet again (because, you see, these rich white folks get away with everything), Wade spends a night in the lock-up with another one of Shaft’s recent arrests, Dominican drug dealer Peoples Hernandez (Jeffrey Wright). These two unlikely partners form a common alliance to dispose of their mutual nemesis, John Shaft.

This summary barely skims the surface of colorful characters, double-crosses and sundry plot machinations that zip by almost faster than they can be registered. Shaft has enough story for a half-dozen summer blockbusters, especially compared to the likes of Mission: Impossible 2, the plot of which can be summed up on a matchbook cover. In many ways, it resembles an Elmore Leonard novel, though the script by Richard Price, Singleton and Shane Salerno lacks the juice of Leonard’s twisty storylines and the snap of his dialogue. It is chock-full of intriguing characters, though it doesn’t always know what to do with them. Some canny casting on Singleton’s part helps connect the dots. Dan Hedaya, Busta Rhymes and Vanessa Williams all provide able backup for John Shaft, and while Christian Bale and Jeffrey Wright both manage to goose up their underwritten villain roles, it is stage actor Wright, best known for Angels in America, who emerges as the real find. His freaky, panther-like body language and off-kilter (and often barely decipherable) line readings push Peoples beyond the generic drug lord the screenplay provides. It’s too bad his team-up with Wade is such a botch; they’re like a couple of Batman villains joining forces to defeat the Caped Crusader once and for all.

It’s also too bad that Singleton has no feel for directing action. He’s over-reliant on TV-friendly close-ups and his camera never seems to be in the right place. Choppy editing doesn’t help conceal that fact. But it’s to Singleton’s credit that he manages to incorporate as much inflammatory material into a piece of summer fluff as he does. Let’s just say it’s not likely that he’ll be getting any tickets to the Policeman’s Ball this year. His NYPD is crawling with racists, bunglers and cops on the take. At one point Shaft tells his uncle he thought he could change things from within, but now knows he can’t. He turns in his badge in memorable fashion. Now he’s a private dick after all.

In the end it’s Jackson’s show, and he comes through like the pro he always is. This was a no-brainer piece of casting: Jackson is required to do little more than look cool and deliver even the dumbest of lines with a conviction and humor that few of his peers could master. The script provides him plenty of opportunities to utter his favorite twelve-letter-word and he never disappoints. There is one thing Roundtree did, however, that Jackson never gets the chance to do. Next time, maybe Shaft can get it on.