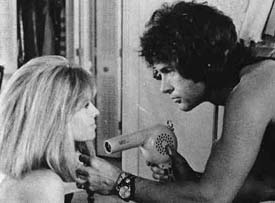 It’s election day, 1968, and Beverly Hills hairdresser George Roundy (Warren Beatty) is applying for a loan to start his own salon. The loan officer, taking in George’s windswept bouffant and lack of any tangible assets, sizes him up as a hippie and condescendingly denies the loan. George responds with a self-righteous speech and storms out the door.

Once outside, he launches into a raging tantrum. Yelling and kicking, he tears off his sports coat and dumps it into a garbage can. And then, just before he climbs onto his motorcycle to speed away, he pulls the coat from the can, carefully brushes it off, and puts it back on.

Shampoo, made in 1975 and now in limited re-release, delivers dozens of such moments, where a scene takes a sharp detour from our expectations and undermines the cliches it’s been exploiting. Written by Beatty and Robert Towne (Chinatown) and nominally directed by Hal Ashby (Peter Biskind’s Easy Riders, Raging Bulls suggests that Beatty and Towne co-directed), it’s the best comedy of its era. A bittersweet bedroom farce with hints of political satire, its riotous humor is infused with melancholy.

George is an unassuming lothario. He has spent so many years listening to women complain about men that he’s learned to say exactly what each of his conquests needs to hear. He’s not so much smooth as perfectly accommodating, less a rapacious seducer than a sounding board for his clients, one who’s always willing to take them to bed if it might make them happy. When his distraught girlfriend Jill (Goldie Hawn) calls him while he’s making love with Felicia (Lee Grant), he manages to charm his way out of Felicia’s room without upsetting either woman. He’s a pushover, doing whatever he has to to make everyone happy. Since he has no expectations and offers no complications, he’s a magnet for dissatisfied women.

As Shampoo begins, George’s drifting has begun to wear on both him and the three women he’s most serious about. He’s unhappy with his life, but unable to articulate just why, so he clings to the notion that owning his own salon will help him settle down. We watch him leap from bed to salon to another bed, all the while trying to set up a business loan.

The nouveau riche world he moves in is preposterously incestuous. Felicia’s husband Lester (Jack Warden) has a lavishly kept mistress named Jackie (Julie Christie), who is, of course, George’s ex-girlfriend. When George, at Felicia’s request, asks Lester to invest in his new salon, Lester coerces him into squiring Jackie to a Nixon victory party, since he has to bring Felicia himself. Since George was seduced by Felicia’s daughter Lorna (Carrie Fisher) that afternoon, he’s managed to bed every woman in Lester’s life in a single day. Lester suspects nothing, of course: all hairdressers are gay, aren’t they? Jill’s at the party, too, with director Johnny Pope (Tony Bill, dripping Hollywood smarm), on a grudge date to settle a score with George.

The party – and an after-party at the home of wealthy hippies – is the film’s centerpiece, and it’s a nearly perfect scene. The characters have such intricate interrelationships and curious agendas that just placing them in a room together for an hour results in an explosive, hysterically funny climax. It’s humor that bites: each laugh is barbed with an undercurrent of real pain and hostility, so that the characters’ aggressions have real consequences.

George spends the next morning sifting through the fallout of the parties, explaining himself to Lester and Jill. These scenes twist the humor of the party sequence, showing just how much pain George has caused. (The film isn’t puritanical: it’s not George’s infidelity but his immaturity – his inability to really give of himself – that’s criticized.) Though these scenes are funny, they leave a bitter aftertaste: his justifications are so transparent that he’s finally pathetic.

Beatty has returned again and again to characters whose arrogant bluster is a thin veneer for nearly crippling insecurity. George might be the best role he ever had, working out the full implications of his Clyde Barrow and John McCabe. He spends the film running at full speed, so desperate to uncomplicate his life that he’s all nerves and misdirected energy. Most actors would insist on making George an innocent, someone too good for this world. Beatty plays him instead as a nice guy who’s not all that smart, someone who sets out to spare everyone’s feelings but ends up wrecking their lives instead.

One of the film’s chief pleasures is the richness of its female roles. The film courts caricature – there’s a whore, a Lolita, a bored housewife, a neurotic actress – but refuses to settle for easy cliches. George gets what he wants by listening, so we’re privy to each woman’s frustrations and attempts to grapple with their own complicated motivations. It’s rare for a Hollywood film to have a single decent part for a woman: four great ones is unheard of. And all the female leads are spectacular, giving performances on par with the best of their careers.

What is perhaps most fascinating about Shampoo today is the vantage it gives us on a very peculiar cultural moment. Made during Watergate but set on the eve of Nixon’s election, it looks back on 1968 with mournful cynicism. More than any other film, it captures the confused response of mainstream America to the counter-culture. The characters embrace all the trappings of hip – mini skirts, long hair and casual sex – but don’t go any further than that. No one’s interested in the election that’s playing out while they jump from bed to bed, and the "hippie" party features valet parking. The era’s sense of expanding possibilities is nowhere to be found here: the characters may be more open about their sexuality, but they’re also perfectly miserable. There’s no free love in Shampoo: everyone pays.