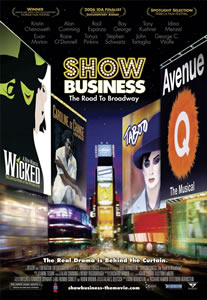 debut as a feature film director in the full-length documentary,

ShowBusiness: The Road to Broadway.And her bias is clear: ShowBusiness is

The film follows the conception, labor and delivery of four musicals during

Wicked, all of which were eventually nominated for Tony Awards(r).We are

treated to a rare insider’s look at how these shows were created, financed,

rehearsed, polished, performed and reviewed.And how and why some

The storybook achievement of Bobby Lopez and Jeff Marx, the composers and

lyricists of Avenue Q, a puppet musical (Sesame Street for adults) could

itself be the plot of a Broadway show.ShowBusiness contains intimate and

comprehensive footage of a four-year journey to their unlikely success.

Starting from the first meeting of potential angel investors, while the two

were working as a temp and an intern, we watch this talented young duo

compose at the piano, we meet their families, we observe the first technical

rehearsal, we see them nervously dressing at home before the Tony Awards,

and we savor with them their win of the coveted “Best Musical” Tony Award.

Unlike Avenue Q, Taboo, composed and written by Boy George, had previously

played on London’s West End.It was brought to Broadway by Rosie

O’Donnell’s personal commitment of $10 Million.Wicked, the story of Oz

from the witches’ perspective, had first opened in San Francisco to mixed

The film concentrates on how shows prepare for their Broadway opening.For

example, Wicked’s composer and lyricist, Stephen Schwartz, describes how he

more deeply.And it obviously worked, since Wicked is still playing to

ShowBusiness also delves into the symbiotic and intermittently malevolent

relationship between the musicals and theater gossip columnists and critics.

(then, Variety, now with The New York Times), Michael Riedel (The New York

From the first lunch, it is apparent that if there is a villain in this

and looks for signs of trouble in these shows.Charles Isherwood quips to

him that “if there isn’t any [conflict] you can create one.”

lot of problems. He avers that Avenue Q won’t find an audience.But most of

publishes many derogatory stories about the rumored inadequacies of the show

and personal animosity between Rosie O’Donnell and Boy George.Taboo was

the first of the four productions to close, despite a fanatic and dedicated

composers, as well as astute critics such as Ben Brantley (The New York

John Lahr reveals that Caroline, or Change, which wouldn’t have attracted a

typical Broadway audience, required and received financial support from the

Broadway community.A somber autobiographic piece with book and lyrics by

by Jeanine Tesori, it explores the relationship between a white Louisiana

family and their black maid in 1963.Despite its acclaim, Caroline, or

Change closed on Broadway a few months after the Tony Awards.However, it

has very successful runs in London and U.S. cities including San Francisco,

ShowBusiness) and Tonya Pinkins, star of Caroline, or Change, were poignant

life.Also touching were quick shots of the many other productions that

opened and quickly closed that season.

ShowBusiness: The Road to Broadway is a tasty bonbon for theater buffs that

has many fascinating backstage details.Perhaps it tried to take on too

much by exploring four Broadway shows.Had it concentrated on the creation

of one musical, it might have been more insightful.Nevertheless,

glamour, devotion, love and money that are the ingredients of a Broadway