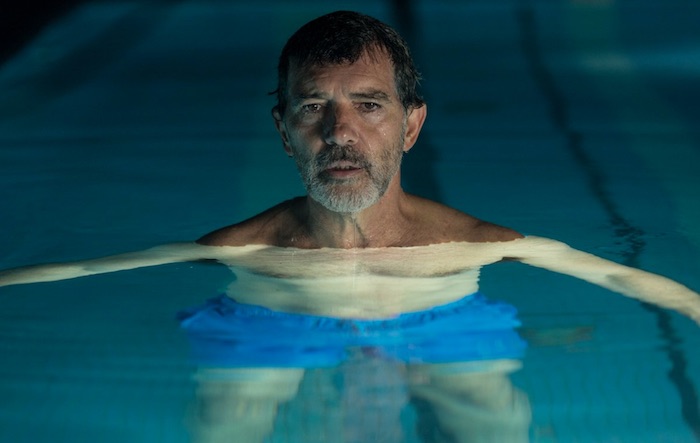 Singer & Son split the difference and give you their Top Fifteen films of the Decade, Singer with 10, Son with five.

Almodovar’s tour de force account of a stage director’s slipping down life revolves around his character’s desire to avoid promising opportunities. The one thing he has learned that he cannot, will not deny, is that each mirage portending opportunity, inevitably reveals the nasty man in him, and only adds weight to an already burdensome compendium of regret and suppressed rage. Almodovar shows this complex of silent recrimination, drawing not only on his meticulous direction, but a first rate artistic  and technical team, where Antonio Banderas patiently yet anxiously walks a tightrope of his character’s own making. Performances are, measure for measure, authentic and never showy. Cinematography and editing hold hands in solidarity with every brilliant artistic inclination and choice by the cast led by Banderas and Penelope Cruz as the mother he adores with a relentless, impossible love that consumes him. All rise to the occasion and hone every detail, until the watch they build keeps perfect time.

A highly fictionalized version of the Mark Zuckerberg story, “The Social Network” delivers a taut and stylish character study of a narcissist.  A distinctly electronic score, composed by Trent Reznor and Atticus Ross propels this movie into the realm of uber cool and the Underground. Coupled with screenwriter Aaron Sorkin’s trademark rapid-fire and, quick-witted repartee, a film about the founding of Facebook, it may be one of the best Fincher films to date.

What do we know about love, especially when it touches three or more lives instead of the prescribed nucleus of two? Should adherence to doctrine, religious or social, determine or dictate how we love? That Graizer’s first film handles this conundrum with so much unselfconscious grace, while cinematographer Omri Aloni captures visuals supporting every dilemma posed, is enough to recommend it. Beat by beat, dexterous performances by Tim Kalkof and Sarah Adler, pull us into the center of their ultimate acknowledgment that the heart has its own reasons.

The Coen Brothers movie that isn’t a Coen Brothers movie, is how I would describe this original masterpiece.  Martin Mcdonagh, after happening upon inflammatory and accusatory billboards about the unsolved murder of a Texan woman, was inspired to write this female-helmed murder mystery.  Sam Rockwell and Frances McDormand provide complex performances in part inspired by John Wayne and Lee Marvin’s characters in “The Man Who Shot Liberty Valance.” Do not miss this Academy Award-winning, gut-wrenching and cinematographic work of excellence.

Baird could have settled for a Pagliacci elegy for this renowned partnership, but the tragi-comic element is more the special sauce than the substance of this film. Baird’s rigorous yet stealthy direction draws out  seamlessly  symmetrical performances by Steve Coogan and John C. Reilly. Both deploy great range and mastery of psychological nuance to mirror the viewer’s own inner  turmoil with dark and light.

In a barren landscape dominated by franchise material and comic book films, Dan Gilroy’s original work, “Nightcrawler” is an oasis.  The script, a collaboration of Jake Gyllenhaal and Dan Gilroy, weaves a thrilling tale of a desperate and impoverished man.  Gyllenhaal sheds more than a few pounds to play a gaunt and feral man. Driven, he rationalizes his crimes utilizing a mantra mired in entrepreneurship and capitalist nostrums.

It’s a court intrigue set in a castle with a surfeit of closets. Thank goodness Director Yorgos Lanthimos doesn’t invoke a computer-generated algorithm to serve up attitudes toward lesbianism based on slogging back through the muck of the post-Victorian era. Instead, we get a rewardingly deliberative rendering from Rachel Weisz as Lady Sarah, and an Academy Awarded no-holds-barred performance by Olivia Coleman as Queen Anne. All the while, we are left to our own devices to wonder who will be the one to overplay her hand, and suffer the consequences.

Famed Mexican director of the films, “Y Tu Mama Tambien” and the dystopian, “Children of Men,” provide us with a visual and audio masterwork.  Sandra Bullock and George Clooney play two astronauts in orbit, attempting to fix the International Space Station, who get caught in a thermospheric catastrophe.  Attention to detail and use of real-world Physics breaks new ground to make for a gripping, terrifying, yet ultimately sanguine experience.

Here’s a fictionalized account of three or four story threads that we in the US are not supposed to know. They bind together the fledgling years of the Cuban Revolution. Seemingly difficult choices by individuals and groups of cadres have to be made in order to remain on the right side of history. They become easier with practice, as they play themselves out sequentially or side by side. The viewer’s handier choice is to become angry that our government has shielded us from the dense historical vein glimpsed here, to  protect the interests of a self-selected few. The harder choice is to subordinate that anger, the better to look upon this moving and riveting story objectively, as an all-encompassing lesson in the tendering of valor.

My top choice would be Jean-marc Valée’s “Dallas Buyer’s Club.”  Matthew McConaughey reignites his career. He and Jared Leto give masterful performances in this deft recounting of Ron Woodford’s struggle with HIV/AIDS in the 1980s. An unembellished and straightforward approach, “Dallas Buyer’s Club” is both brutal and inspiring.

Based on the life and observations of African American author James Baldwin, this documentary has him playing hardball with the deft touch of a pointillist. No political figure of note today is saying what he said in his day, let alone with such poetic candor. The 1960s Civil Rights movement made important strides in creating an portal in this nation’s meritocracy for Black strivers whose idea of “eyes on the prize” has been limited to scaling the fortress walls and reaching beyond the glass ceilings meant to keep them out. But what about the proletarian voice of Blacks who work industrial or service jobs with a range of other nationalities? Today, it  echoes in the hollow vale of declining unionism. This, even as street demonstrations and strikes make an irrepressible effort to revive its sonorous timbre and point the way forward. Baldwin’s declarations adduce important coordinates to that ultimate compass, once again under construction.

Juliette Binoche heads the cast as an international film star, Maria, whose assistant, Valentine (Kristen Stewart), never leaves her side. In the midst of the loss of a former director of a play in which the role Maria played became her tour de force, she is invited to take a subordinate part, with a younger American actress cast in the role she had made famous twenty years earlier. It’s an all-too-familiar scenario, which actors face, yes, but more often the lot of dancers, who find themselves coaching their replacements, long before they are ready to let go of the role that became one with who they are and how they see themselves. The treatment here arrives from several camera angles, and the points of view of each character who plays a role in Maria’s life. Under the vast expanse of clouds that surround the alpine retreat where much of the story unfolds, there is nonetheless little space for air to breathe as tension mounts. Simmering, but unvoiced doubts, resentments, competition, and remorse, straiten the lebensraum for those who are accustomed giving free expression to their most intimate thoughts and feelings.

Here is the mother ship in a series of films by this Iranian writer/director. It deserves to be compared to this year’s recent release, “The Marriage” and “The Cake Maker.” It’s the story of a couple whose middle class moorings have them reluctantly and not-so-reluctantly tethered to filial duty in the social rut they’ve inherited. The wife has had all she can endure, and doesn’t want their young daughter to grow up in in the suffocating and misogynistic atmosphere of clerical surveillance and retribution for sins/crimes with which she does not hold. She wants the family to move to another country. The husband, who sees himself more supported and less impacted by the harshness of their surround, wants to stay exactly where they are. As if hog-tied, each effort to take distance from what is prescribed by state and religious codified doctrine, cuts deep. The viewer enters their domain of narrow corridors in the halls of injustice and the hostile impingement of familial summary judgments.

Mildred Hayes (Frances McDormand) is a cross between the spider, Charlotte, of E.B. White’s “Charlotte’s Web,” and a back woods vigilante. Even so, she is quick to point out to local cops that they are “too busy torturing Black people” to look into who murdered her daughter, Angela. With no credible response from the cops, she takes matters into her own hands by paying for and erecting three highway billboards that demand for support for her cause. Hayes’ mission comes at a moment of growing consciousness that the putrefying swamp that separates Hayes from justice will never be drained under this system. Her awareness and the intransigence of local law enforcement gives rise to a negative polarity between McDormand and the patronizing men, played by Woody Harrelson and Sam Rockwell, who dodge and weave–and worse—in an attempt to defend against her well-placed blows.  For male viewers, the film affords the rare opportunity to live in the skin of the excluded other half, and for women, it’s a reminder that under conditions of oppression, you get not what you wring your hands over, but what and whom you organize.

This is a slice of inner-city life in the shadow of Miami. “Inner City” is the euphemism for what used to go by “ghetto,” as in the racist and dismissive throwaway, “That’s so ghetto.”  Here we meet Juan, a drug dealer, played as authentically and truthfully by Mahershala Ali an actor who converts the “strong and silent” type to the strong, silent, and vulnerable type that  the world of cinema has been waiting for. It comes as no surprise that Ali’s off-camera personality feels completely unsullied by Hollywood “culture” and the disarray that it can bring. Juan takes it upon himself to mentor “Little,” a kid he runs into, played with precocious sensitivity by child actor Alex Hibbert. Through the tragic moments, an integument keeps reasserting itself in the stirrings of homosexual desire among the male principals. It prevails in spite of the social constructs that conspire to prevent the boys-to-men from reaching a plateau of self-valor. In harmony with that persistent thread, is the lyrical score by Nicolas Britell, paired with trance-like cinematography by James Laxton. They conspire to knock your socks off, and make you want to go waltzing barefoot in the moonlight, on the nearest sandbar.