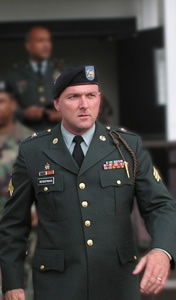 Produced and directed by Gary Weimberg and Catherine Ryan

At this moment in time, as the “debate” on United States Iraq policy has devolved from a vehement hawk/dove, right/left affair into a nearly bi-partisan Bush-bashing, a new documentary, Soldiers of Conscience, takes a subtler anti-war tact, presenting the story of four soldiers who decided to stop fighting. It is each man’s moment of truth, a “crystallization of conscience” that is presented to create dramatic interest; this is a film about ideas, and feelings, rather than a messy Michael Moore-style diatribe. Conscientious Objector status becomes a journey for each soldier in a way as arduous as war, and as unachievable as peace. Two of the men end-up behind bars.

Today’s soldiers, (unlike those who fought earlier wars) are so well “conditioned” by the time they get to the battlefield, that there is no room to question the pulling of a trigger, the taking of a life. Killing is just a reflex. Not just moral values but nearly all non-tactical decision-making is left back home, supposedly irrelevant to the “job at hand”. That’s what the military would like, anyway. Soldiers of Conscience shows that right and wrong really don’t go away, that individual moral values, especially in the face of causing death, are impossible to brainwash out of the soldiers at work. The human capacity for empathy (and guilt) may become dulled and subverted, but it apparently can’t be completely obliterated, for all the military’s attempts to do so.

To their credit, the creators of Soldiers of Conscience take their time to lay out their case. What might have been a heavy-handed commercial for pacifism (Italy recently reported that a huge majority of their draftees chose conscientious objector status instead of fighting) is presented as a character study, four soldier’s stories. These are pro-America, anti-pacifist, voluntary soldiers, rather than some whiny draftees. Each man’s decision to quit killing is a huge, conflicted decision.

Joshua Casteel, a West Pointer, Young Republican straight arrow, ultimately finds that his fundamental Christianity comes in the way of his job as an interrogator at Abu Ghraib prison. Kevin Benderman, a 240-pound sergeant from Tennessee, simply decides he’s had enough. Scenes of Benderman at home feeding chickens on the morning of his court-martial (and trip to jail) offer profound irony, sadness without a need for narration. Another soldier, Camilo Mejia, a private (“I am a nobody”), and Aidan Delgado, a practicing Buddhist, are shown marching in demonstrations and lecturing to college students as civilians, showing slides of dead bodies and miserable violence, making amends.

This is not a film to change anyone’s mind. In its modest way, however, Soldiers of Conscience introduces the idea of conscientious objectionism as a viable alternative to what becomes, for many young men these days, a labor of death-making. What if they gave a war and nobody came?