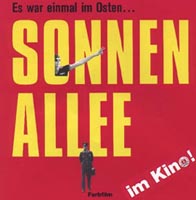 I am 17 years old and live in the German Democratic Republic. Otherwise, I am doing fine.

The opening to Sonnenallee hints that this fine new German comedy is going to offer a twist on the usual teenage coming-of-age story. With a screenplay by first-time director Leander Hausmann and author Thomas Brussig, the film depicts the life of a group of East German teenagers in the 1970�s on Sonnenallee, an actual street running through Berlin which was sliced through by the Wall at one end. The East German residents of the street required special permits to live so close to the border crossing, which is always present as the simple story plays out.

Micha (Alexander Scheer), Mario (Alexander Beyer) and their friends talk one day of starting a resistance group, but their attention soon shifts to more pressing matters like acquiring "forbidden" Rolling Stones albums or meeting girls, such as the block�s blonde princess Miriam (Teresa Weissbach), who literally stops traffic when she appears.

Hausmann and Brussig take great care to provide fine details of the absurdity of daily life in East Germany: bizarrely designed, malfunctioning household goods; the presence of all kinds of state police and Communist youth groups; attempts at Marxist indoctrination in the schools (the source of some of the best gags); and the lure of the West, with its forbidden wares, music and television.

The pervasive police state system is never more than an arm�s length away, as Micha knows when he must decide whether to go in the Army for three years in order to be able to study in Moscow. His parents (Katharina Thalbach of The Tin Drum and Henry H�bchen) are also trying to outsmart the system. The mother finds an old woman�s lost West German passport, and experiments with disguises while pondering whether she should escape or not. West German Uncle Heinz visits every week with "smuggled" goods which turn out to be panty hose or underwear, not, in Micha’s view, something useful like rock music or pornography. Micha also encounters betrayal close-up as his best friend, left without prospects, is forced into working as a Stasi agent, in a scene which echoes the unfinished debate in current German society.

In general, however, the authority figures in the film get off a bit easily, as every one of them, from the Stasi agents to the border guards to the block warden (Producer Detlev Buck) are portrayed as relatively harmless buffoons. East German reality was probably a lot less amusing when it came to these encounters. Other elements are inaccurate and anachronistic, but effective, such as a platform right on top of the Wall, where West Germans can comment like a Greek chorus on the proceedings or even harangue the characters. (One exclaims: "Look – an Ossie!" – a derisive term which didn�t exist in German until after the Wall came down.)

As if in anticipation of nit-picking accusations of historical revisionism, Haussmann wraps up the end of the film with a musical dance number, with the voice over "I was seventeen and in love for the first time" as a reminder that he set out not to make a docu-drama, but to entertain and charm us, which he has done very well.