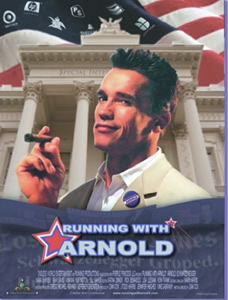 The South by Southwest film festival just wrapped up its 14th annual edition, but it still dwells in the shadow of the music conference with which it shares a name and a week in mid-March. Although SXSW Film will never challenge Sundance or Toronto as a hotbed of buzz and deal-making, it is developing a reputation as one of the nation’s leading showcases for documentary filmmaking. This year’s crop featured politicians, superheroes, videogame champions and roller derby queens.

This muckraking, tabloid-style look at Arnold Schwarzenegger’s run for the California governorship hits all the highlights (or lowlights), from the recall of Gray Davis to the sexual harassment scandals that dogged the candidate in the campaign’s final days. It even entertains the notion of a constitutional amendment that would allow the Terminator to become president. This is all fish-in-a-barrel material, and director Dan Cox’s tone is smug and self-congratulatory; the result is a slick package (complete with sarcastic narration from Alec Baldwin) that is hardly deeper than your average episode of Access Hollywood. Pumping Iron is a much more insightful look at the subject, if the world needs such a thing.

In many ways the polar opposite of Running with Arnold, this half-hearted takedown of Michael Moore is far more polite and even-handed than its firebrand subject. Filmmakers Rick Caine and Debbie Melnyk set out to praise the Fahrenheit 451 director, not to bury him, but that changed once they started digging into Moore’s history. The most startling revelation the film has to offer may be the fact that it took Caine and Melnyk so long to catch on to some of Moore’s tricks of the trade. His propensity for manipulating timelines (not to mention emotions) has been well documented since the release of Roger & Me in 1989, and his flip-flopping on Ralph Nader’s presidential aspirations is no secret either. While there is some satisfaction in seeing the big guy’s own techniques turned against him (the filmmakers repeatedly corner him at public events, pestering him as he has so often done to his quarries), new revelations are few and far between.

Confessions of a Superhero

Each SXSW seems to feature at least one portrait of quirky folks that walks the line between poignancy and exploitation and occasionally takes a drunken stumble over it. This year’s model focuses on four wannabe actors who make a (bad) living by dressing as famous characters on Hollywood Boulevard and posing for photos with tourists in exchange for tips. Most appealing is Joe McQueen, once homeless, now the Hulk – he’s a sweet-natured fellow who can’t help but feel that his job is simply a gimmicky form of panhandling. Unfortunately, he has the least screen time, the bulk of which is devoted to Christopher ‘Superman’ Dennis, a star-struck fellow whose apartment is a shrine to the Man of Steel; he’s an all-too-familiar type. Somewhat more interesting is Maxwell Allen, whose dark Batman persona appears to have taken a toll; he makes many cryptic (and some not-so-cryptic) references to a violent past, and is a little unsettling to watch.

This years-in-the-making chronicle of the fractious Austin roller derby scene is like two seasons worth of a favorite reality show compressed into two hours (Indeed, a short-lived reality series centering on one of the Austin leagues aired on A&E in 2006). All good intentions surrounded the roller derby revival, but business and personality conflicts between the four founders of the league and the skaters led to a rift and the formation of a rival league. Director Bob Ray’s access to the principle characters and patience for letting the saga play out results in a fascinating chronicle, complete with thrills, spills and humor.

This crowd-pleasing festival highlight is a simple tale of two men vying for the world’s record high score in Donkey Kong, but that description doesn’t begin to capture the wit, drama and humanity of Seth Gordon’s outrageously entertaining documentary. Billy Mitchell is the all-time champ; with his feathered mullet and wispy beard, he’s an ’80s relic coasting on past glories. Steve Wiebe is the challenger, a regular guy with a history of failures in life. Their dual quest to reach the videogame’s “kill screen” and top each other’s high scores is overseen by an indelible gallery of game-geeks and marked with unexpected developments and reversals of fate. King of Kong is being remade as a scripted feature with actors, but don’t miss the real thing when it opens this summer in theaters.