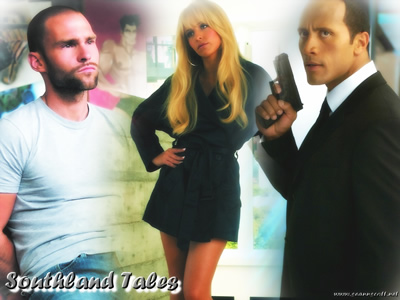 Written and Directed by Richard Kelly

When David Lynch’s avant-garde horror film “Eraserhead” became a cult hit, an advisory to pregnant women grew out of its cultural zeitgeist. The warning had a superstitious quality, as these kind do, making vague predictions of how the movie’s disturbing scenes of childbirth and infant deformities might adversely affect pregnancy. Who knows what might happen to these women? Maybe watching the movie would send them into preterm labor.

After watching “Southland Tales,” a movie that may still achieve some kind of cult status despite all the negative reviews it’s been getting, I’d like to give a similar warning to women, based on nothing more than my own experience. This movie may cause severe anxiety, heart palpitations, and emotional disturbances in women going through menopause. Watching “Southland Tales” is worse than the worst Windowpane you ever took back in the 70s, ladies, and at this vulnerable stage in your lives, you don’t want to feel like you’re even crazier than you already think you are.

Remember the scene in “A Clockwork Orange” where Malcolm McDowell has this contraption around his eyes so he can’t blink, and he is forced to watch endless movies of horrible acts of violence? This is what I felt like, sitting in the theater and being bombarded with a steady stream of sensory overload. If there was a cultural reference to satirize, it was there, often several at a time, and even, strangely enough, in opposition to one another. And the more the spoofs kept coming, the more inured I became, until I didn’t quite know how to react anymore. It felt similar to acid-induced paranoia, where the line between being serious and making fun gets blurred. I knew what I was watching was supposed to be funny, but who, or what, exactly are we laughing at? The jokes seemed to be on everybody, and therefore the social commentary on nothing.

It’s virtually impossible to say exactly what the film is about, considering its endless allusions to other stories, other genres, and its frenetic skipping back and forth between several plots and subplots. But they all revolve around the writer/director Richard Kelly’s dystopic vision of America’s future, where power, politics, media hype and the effects of technology on the environment and culture, are all steering civilization into its apocalyptic self-destruction. The movie starts with a nuclear attack on Texas, but that turns out to be nothing compared to what’s to come.

The cast of characters says it all. Sarah Michelle Gellar plays Krysta Now, a porn star turned talk show host who is also writing a screenplay with her amnesiac lover Jericho Kane (Dwayne Johnson), who is actually a famous movie star named Boxer Santaros, married to the daughter (Mandy Moore) of Texan Senator Bobby Frost (Holmes Osborne), a Republican who is running for president, and who along with his wife (Miranda Richardson) also runs a corporation that will soon supply America with an alternative fuel made from energy found in ocean waves that is captured through a device invented by mad scientist Baron von Westphalen (Wally Shawn). But somehow, this invention has caused a rift in the fourth dimension, which has not only caused Boxer Santaros’ amnesia, but the splitting of Roland Taverner (Sean William Scott) into two men, both of whom have been kidnapped by a group of neo-Marxist revolutionaries, played by former cast members of Saturday Night Live (Nora Dunn, Jon Lovitz, Amy Poehler).

“Southland Tales” really is a guy movie, right down to all the sci-fi, comic book and porn references, the cool futuristic gadgetry, the gross humor, the depictions of women as either fatuous sex objects, ballsy adversaries or sadistic lunatics, and everything else that tweaks the masculine pleasure centers. This is not to say that women can’t enjoy “Southland Tales.” We do try to relate to our mating partners where we can, and satire is considered common ground. It’s also fair to say that if you’re a man, that doesn’t necessarily mean you’re going to love this movie. Now if you’re a bit of a loner who watches late night B horror flicks, a geek who thinks Philip K. Dick is a genius, or whose viewings of “Dr. Strangelove” and the Star Wars franchise is in the double digits, then you’ll probably love “Southland Tales.” Or you will with the help of a mild hallucinogenic you keep stashed in a drawer by the couch.

This is director Richard Kelly’s second feature film. His first was the equally dark and surreal sci-fi spoof “Donnie Darko,” which has become a cult classic. After the surprise success of Darko, Kelly took years to get “Southland Tales” made, possibly sensing the pressure common among young filmmakers to surpass the success of their freshman efforts. From the looks of it, Kelly seemed to be on a mission to make a masterpiece. It feels like he put everything into it; every last freaking idea he ever had in his whole creative life is in this movie, and the weight of all those ideas only sinks it into a confusing morass. “Southland Tales” debuted at the 2005 Cannes Film Festival, and after all the expectation, there was an almost unanimous agreement that it was a dud. Cowed by the film’s reception at Cannes, Kelly took the next year and a half to try to salvage his baby, and a part of me understands why. “Southland Tales” is obviously Kelly reaching for something big, something earthshaking, some bell toll of cinematic greatness. I find it sad to see all that imagination and ambition coming to so little. What sympathy I have left in my menopausal heart goes out to Richard Kelly. Don’t despair, son. You’re still young. And barring a nuclear disaster, there’s still time.