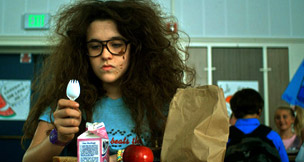 Spork (Savannah Stehlin) lives in a chrome trailer with her brother Charlie (Michael William Arnold). Their mother has died and, because the family is so poor, she is temporarily buried in the front yard. Next door, in the next chrome trailer, African-American Tootise Roll (Sydney Parks) shakes her booty day and night, perpetually dousing her hair with Afro-Sheen and yakking on the phone with Spork. Their bedroom windows give on to each other and they can just as easily talk across the breezeway between them.

Spork embraces her mother’s claim that she, the mother, has gone to Oz and is waiting for Spork there. Spork’s favorite movie is “The Wiz,” and, in one of many moments of guffawing humor, learns that Dorothy is actually white. Spork hangs out with the black girls at school; their enemy is a gang of identical-looking blonde Barbie-wannabes. The film is set in the archetypal world of 14-year-olds’ middle-school hell, where Spork is a desperate outsider, seeking acceptance from someone, anyone. The problem? Spork is a hermaphrodite, a girl-with-a-penis, a fact known to every kid at her middle school.

Less a musical comedy (there is no singing) and more, at times, an extended MTV break dance video, the plot of “Spork” centers around Spork’s effort to win the dance competition cash prize so that her best friend Tootsie Roll can afford the trip to visit her father in prison. First, however, Spork needs to learn how to dance, as well as how to fend for herself in her hilariously savage middle-school world, while her brother entertains skanks back at the trailer. Along with Tootise Roll, she befriends the smallest boy in her class, who has two dads and is endlessly teased about being “gay.”

This comedy is potty-mouthed, hip, and often uproariously funny, all the while telling a tender tale about a sweet, big-haired intersexed girl trying to find her way in the world. Like Dorothy on the road to Oz, she makes some pretty unusual friends and allies along the way. “Spork” is like an early John Waters film, for the junior high set.

There is an awful lot of break dancing in this film, and serves as a primer of who’s who in the pop music world of 14-year-olds circa 2010. The film plays to both junior high and adult audiences. (Alas, “Spork”‘s likely rating will bar the younger crowd at the ticket counter.) The acting is surprisingly bright and nuanced, given the youth of the cast. Savannah Stehlin as Spork is always sympathetic, and never piteous. Sydney Parks as Tootise Roll is sharp as a tack. Perhaps the best minor character is Chunk (“like ‘chink,’ but with a u”) a Baby Huey-like Asian fat kid, another outsider, who is the sage of the school. Of course urban dance music wins out over white-boy groups in the cool category. And everyone gets their appropriate come-uppance. This film is a winner.