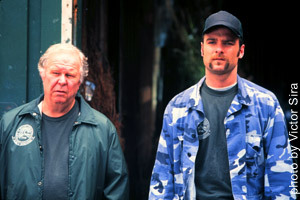 Spring Forward is a small, independently made film, without special effects or gimmickry, that offers an intelligent script and first rate performances. Like You Can Count on Me, it is centered with solidly developed characterizations and the characters have quirky individuality.

Paul (Liev Schreiber) has just been paroled from Danbury where he was imprisoned for an armed robbery conviction. A sort of contemporary Jean Valjean, Paul turned to a criminal act under financial pressure and considerable stress; he is genuinely repentant and seeks, through reading philosophical and inspirational books, to find some meaning in his life and to get "back on track."

The film begins as Paul starts a new job with the parks department of a small New England town. He’s paired with Murph (Ned Beatty), a veteran employee near retirement. Murph seems as grounded and secure as Paul is confused and defensive. Over seven episodes spanning a year, the two work together, talk together, and learn from each other. The episodes are bridged with beautifully caught scenes of seasonal New England landscapes and activities like trick-or-treating and stringing Christmas lights.

The differences in the ways these two men react and respond are illustrated through their dialogue as they experience a series of incidents and meet a variety of people–from a homeless man found living in the park to a self-important young local businessman to a woman in the midst of a nervous breakdown. Murph has a gay son who was ejected as a scout leader and is dying of AIDS. As he and Paul work together and talk, they develop a trusting relationship, able to share the intimacies of their feelings, bridging the age and experience gap between them.

Beatty, well known from countless television roles, captures in his performance the regular-guy family man, steady and wise with good common sense, but fearing emptiness in his forthcoming retirement after working his whole life and emotionally pained that he could not save his son from the bigotry of others. When Paul spouts a lot of high-toned philosophy from his reading, Murph listens and translates the point back to the simply stated idea that Paul is struggling to express. Schreiber (A Walk on the Moon, Hamlet) seems to grow with each successive film performance. Over the course of Spring Forward he subtly shows Paul’s transition from fearful insecurity, growing into confidence and understanding.

Tom Gilroy trusted his own strong script for Spring Forward and served himself well as director, keeping the focus on his well-realized characters. He might well have omitted the somewhat hackneyed scene of the two men sharing a joint and falling into inarticulate giggling, but he almost salvages it when they fall silent and the camera draws back to show the beauty of the autumn colors in the park landscape.

Spring Forward has spent a year making the rounds of the film festivals, apparently struggling to find a distributor. Undoubtedly it will follow the pattern of too many "small" films and suffer from under-promotion. It would be a shame if this warm and entertaining movie is buried before it finds its audience.