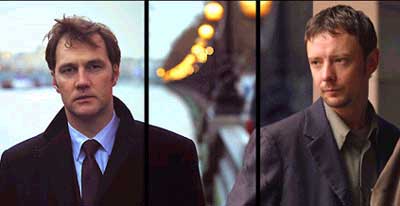 On a London back street, a frightened young man is shot to death behind a dumpster. In a cheap cafe, a hard-eyed teenage girl waits, an expensive metal briefcase resting on the floor at her feet. In the halls of Parliament, a rising politician breaks down on camera after learning about the death of his political researcher beneath the wheels of a train on the London Underground. The first half hour of Paul Abbott’s political thriller, State of Play, firmly hooks the viewer into following the twists and turns of its plot through all six of its smart, unpredictable, and fast-moving episodes.

John Simm plays Cal McCaffrey, an investigative journalist and an ex-campaign manager for the MP whose relationship with the dead researcher has come under scrutiny. Did Sonia Baker fall onto the tracks? Was it suicide? Murder? And why, on the morning of both their deaths, did she receive a brief phone call from Kelvin Stagg, the boy killed in what is presumed to have been a drug related shooting?

This is more than just another sordid domestic scandal, and McCaffrey and several of his colleagues at The Herald, (including the youthful, driven reporter Della Smith, played by Kelly MacDonald), set out in pursuit of the answers. It’s a world of high-profile politics and journalism where the normal rules of personal interaction do not apply. Tape recorders are concealed in every pocket and absolutely nobody can be trusted to either tell the truth or respect a confidence.

If there’s a drawback to State of Play’s combination of witty writing and smart performances, it’s that there are very few moments where the viewer is going to feel comfortable about going into the kitchen for a coke and a sandwich. Unexpected revelations lurk around each corner, and some of the performances are so good it’s hard to tear your eyes away. David Morrissey plays Stephen Collins, the adulterous MP, as the kind of pudgily handsome man who lies plausibly then slides without embarrassment into the truth only when it’s plain the lies aren’t working. Bill Nighy is The Herald’s flamboyant editor, a lean patrician who lapses back into his working class accent when it suits him. Marc Warren’s turn as the tacky PR wannabe Dominic Foy stands out not only because Warren beautifully captures his sweaty desperation, but because Foy is almost the only character in the film who’s not a talented liar. Watching him getting effortlessly batted around by the smooth young sharks circling him in search of the truth is almost painful.

Like any well-made political thriller, State of Play is believable enough to raise the question of where human consequences fit in when it comes to affairs of state and the pursuit of the truth. Some of the characters see their quest as a game where they can show off their skill and advance their careers. When they are touched personally, suddenly they’re no longer "playing." McCaffrey’s abilities as a reporter are undermined by his friendship with Collins and when Della Smith realizes she’s in personal danger she changes quickly from a hard-edged journalist to a frightened and vulnerable girl. Occasional glimpses of the anguished, angry families of Kelvin Stagg and Sonia Baker are reminders of just how deadly it can be to play "games" where the stakes are too high.