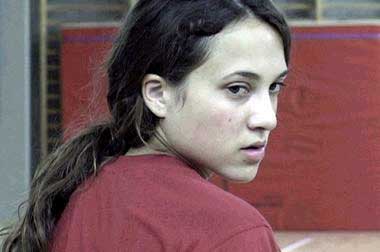 A life without an enduring passion would be pretty dreary. Fifteen-year old Sabine Rederer (Louis Szpindel) is more than passionate about running–she&#146;s obsessed.

Early on in writer-director Ursula Meier&#146;s Swiss-French production, Strong Shoulders, Sabine cries out that if she couldn&#146;t run, she would kill herself. For most teenagers, this would be pompous hyperbole, but from Sabine, it could be very well be truth. Yet as runners go, Sabine is rather middling. Her coach, Gelewski (Jean-Francois Stevenin, Brotherhood of the Wolf), says she has potential and her best times are decent, but Sabine isn&#146;t about to become U.S. Gold Medalist Marion Jones (who makes a cameo appearance in the film).

Daughter of divorced parents, Sabine lives with her mother (Anne Coesens) while attending a track and field training camp. Her two best friends are sprinter Fatia (Dora Jemaa) and high-jumper Dani (Nina Meurisse). Fatia thinks Sabine has little use for them except to help her train, but demure Dani is resolute in her support of Sabine. Sabine reads any article on running she can get her hands on and believes them all no matter how preposterous the technique recommended. She also knows the name of every world class runner, both contemporary and throughout history.

Sabine runs the 400 meter dash, but wants to do the 800 because she believes she has greater stamina than strength. Gelewski disagrees saying she has to master the 400 first. Impertinent Sabine thinks she always knows best and fails to take criticism well. She is all zeal without control, and when Glewski gives her encouragement, she does not hear him. Sabine even gets upset at her mother for not genetically endowing her with smaller breasts which would allow her to run better. Yet her curt demeanor is a big front for her insecurities about her actual prowess.

During training, Sabine gradually grows closer to a very fast boy named Rudy (Guillaume Gouix). A scene that begins with them checking out each other&#146;s muscles ends in a pert, smooth seduction. Where the scene is leading might be predictable, but the way Meier and her actors handle it has an unforced, effortless feel.

Strong Shoulders excels at a kind of naturalism, constantly alluding to a world taking place beyond Sabine&#146;s horizon. Every character has a moment devoted to thoughts about their own personal lives that often have little to do with Sabine. Meier presents this in such an understated fashion that inattentive viewers might not notice it at all. At a track meet, Sabine&#146;s mother spies her ex-husband in the sights of her video camera, but as he turns in her direction, she quickly shifts away. Sabine&#146;s father wants to be closer to her, but she brushes him and his feelings away with contemptuous disregard. Dani has been troubled by a recent high-jumping slump, yet she deals with it in her own way that markedly contrasts with Sabine&#146;s own attempts to manage her running. While Sabine laments Coach Gelewski having his glory days in the Munich Olympics long behind him, he is oblivious to her pity and has his concentration focused on improving the team. Rudy&#146;s father can&#146;t even remember Sabine&#146;s name.

Perhaps inspired by The Passion of Joan of Arc, Meier holds Szpindel&#146;s beautiful face in almost constant close-up, and half the movie is devoted to an intimate study of her every action and reaction. Her piercing eyes stand out against her otherwise soft features, her usually pouted lips occasionally break into a dimpled smile. Meier runs a big risk in focusing so much on a disagreeable character, but the young Szpindel pulls it all off with perfect intensity without a hint of self-consciousness. As the coach, Stevenin so inhabits his role that one cannot detect any acting, exactly the kind of superb performance that won&#146;t win any Oscars.

When the movie starts, it is five weeks before the championship race. While Meier keeps track of how much time passes before the race, the film does not at all feel like a buildup toward the "big game" climax of most sports movies. Strong Shoulders isn&#146;t so much about athletics as about the driving neurosis of this particular girl, and above that, about discovering a pursuit in life that makes it worth living. When all is said and done, Sabine may be afraid of finding out just how good or bad a runner she is. In the end, maybe that doesn&#146;t matter.