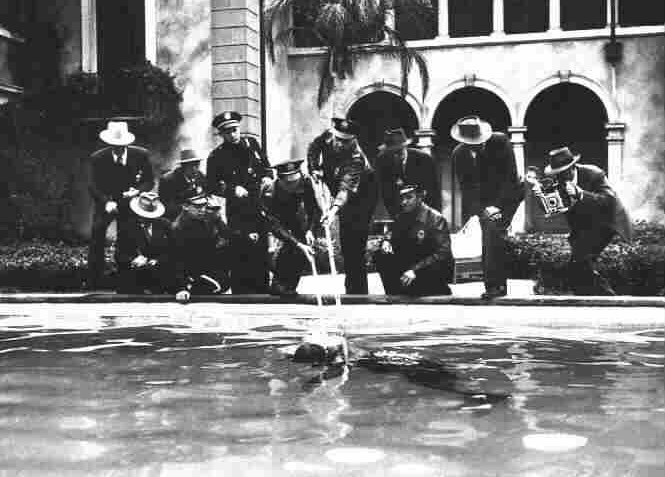 Even fifty years ago, it seems Hollywood’s best days were already behind it. Los Angeles is a city that has been haunted by its past for nearly the entire length of its existence, and Sunset Boulevard is still its quintessential ghost story. Half a century later, Billy Wilder’s masterpiece remains the eeriest and most caustic evocation of the Golden Age’s twilight ever captured on celluloid.

Sunset Boulevard is not the usual sort of ghost story, however; the only paranormal presence is the one narrating the tale from beyond the grave. The film notoriously begins with a sardonic, deadpan voice-over telling us of the discovery of a corpse floating in the pool of a long ago famous movie star. As it turns out, the narrator and the corpse are one and the same – Joe Gillis, the down-and-out screenwriter played by William Holden. This posthumous play-by-play conceit has been appropriated several times since – most notably in this year’s Oscar winner for Best Picture, American Beauty – but in Sunset Boulevard it is much more than a mere gimmick. This whiff of the supernatural sets the tone for the gothic creepshow to come.

Gillis proceeds to tell us exactly how he ended up face down in that pool. With his screenwriting career going nowhere, he’s ready to throw in the towel and head back to Dayton, Ohio to swallow his pride and resume his newspaper desk job – if they’ll even have him back. He’s running out of money and just one step ahead of the repo men who are trying to seize his car. When his tire blows out, Gillis ditches the car in the garage of a crumbling, presumably deserted old mansion in the Hollywood Hills – "a great big white elephant of a place." But this house is haunted by the living, the sepulchral silent film actress Norma Desmond and her devoted manservant Max, who mistake Gillis for a coffin-maker they’ve been expecting. It seems Norma’s favorite pet monkey has just passed away.

As Gillis is attempting to extricate himself from these bizarre circumstances, he hits upon a plan. Norma, it turns out, is hard at work on the script for what she envisions will be her return to the silver screen: a re-telling of the story of Salome, which she plans to enlist Cecil B. DeMille to direct. Gillis sees through her bluster – he knows she’s a delusional old woman with no hope of making a comeback. But he also knows she’s got money to burn, and so – making it seem like it was her idea – he arranges to become her co-writer. But their collaboration goes further than Gillis had imagined; he ends up moving into an apartment above Desmond’s garage, then into a spare room in the house, and finally into Norma’s bedroom. Ah, the endless humiliations of the Hollywood screenwriter.

Gillis comes to realize that Norma is obsessed with him, and that he is essentially possessed by the malignant spirit of the mansion, as much so as Jack Nicholson’s caretaker in The Shining is possessed by the Overlook Hotel. The connection between the two films may not be an obvious one, but Norma’s New Year’s Eve party, where Gillis learns he is the only guest besides a ghostly string quartet playing in the distance, surely influenced the ballroom scenes in Kubrick’s horror classic. Norma’s "waxworks" – her card-playing friends played by other silent film era relics like Buster Keaton and H.B. Warner – have a similar otherworldly quality. They may be alive, but they’re phantoms as far as Hollywood is concerned. An aura of rancid melancholy hangs heavy over much of Sunset Boulevard; when Gillis makes his New Year’s Eve escape to a party hosted by his friend Artie Green (a startling Jack Webb, in unlikely hepcat mode), his sense of relief is as palpable as it is inevitably short-lived. Despite his attempts at resurrecting his screenwriting career with the help of development girl Betty Schaefer (Nancy Olson), Gillis no longer resides in the land of the living.

William Holden was not Wilder’s first choice for the role of Joe Gillis; Montgomery Clift had been set to play the lead, but backed out at the last moment. Holden brings a gritty film noir quality to the movie; he has the world-weary air of a private eye in the Bogart mold, and his dry, cynical line readings make the voice-over work beautifully – a rarity in motion picture history. Likewise, the director had originally envisioned Mae West as Norma Desmond (to quote Carmela Soprano, regarding Martin Scorsese’s near-casting of Robert De Niro in Last Temptation of Christ, "different movie"). Gloria Swanson is an authentic star of the silent screen who would likely be completely forgotten today if not for this…not a comeback, "a return." Her performance pushes caricature past the breaking point, into the realm of looney tunes. It’s one of the all-time greats – stylized and authentically crazed and – like Anthony Perkins’ Norman Bates – career-defining. To see footage of the real Swanson, speaking with her actual voice, is to be shocked anew by the transformative power of movies. As Norma’s ex-husband, ex-director and current lackey Max von Mayerling, Eric von Stroheim shows no fear at the risk of being forever perceived as a sniveling homunculus; there appear to be no depths of servility he considered too abject for his characterization (Wilder apparently had to talk him out of being glimpsed washing Norma’s underwear during one scene).

Wilder is often dismissed as a "writer’s director" (or worse). It’s true that his visual style is a fairly elemental one; apart from the opening shot tracking away from the title etched on a sidewalk and down the famous boulevard as approaching police cars come into view, his camera set-ups are generally static and unadorned. But if Wilder’s images don’t possess the verve of a Kubrick or an Orson Welles, they do exert a cumulative power: Holden shot from underneath as he floats lifelessly in the pool, flashbulbs popping behind him; the same pool seen empty and disintegrating from his garage apartment window, and the decaying tennis court beyond it; Norma rising into the dust illuminated by a projector casting shadows of her former self on the wall; her legendary approach to the camera at the end, as she proclaims herself ready for her close-up. The air of rot and dissolution is almost unbearable.

It’s difficult to imagine now how shattering Sunset Boulevard must have been back in 1950. Tinseltown has been skewered many times since, in movies as different as Robert Altman’s brilliant The Player and Joe Eszterhas’s wretched Burn Hollywood Burn. Yet in all this time, no film-about-film has ever approached the dark, glittering genius of Wilder’s vision. Even as the movie industry grows more and more appalling, Sunset Boulevard just gets better and better.