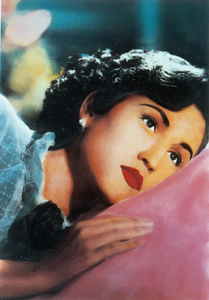 Stella Malucchi in Tears of the Black Tiger. Photo courtesy of Magnolia Pictures.

Tears of the Black Tiger

Tears of the Black Tiger is a strange film. That is what is both good and bad about it. It is a Thai film that satirizes the influence exerted by Hollywood Westerns and melodramas on Thai cinema in the 1950’s and 1960’s. The director and writer, Wisit Sasanatieng, takes the Thai versions of these Hollywood films and turns them on their ears by satirizing them and then adding his wonderfully novel approach to color, scenery and camera techniques.

We are presented with an exaggerated version of a Thai Western that seems to honor and parody all Westerns from silent movies to Sergio Leone’s Spaghetti Westerns. Luckily, we are watching the melodramatic story line superimposed on fabulously over-saturated colors and gloriously painted backdrops. Consequently, the parody often displays buckets of spurting blood, but in magnificent and lurid red.

The art direction is what lifts the film into the realm of art. The colors are exceptionally vivid and colorful and sometimes clashing. For example, walls were painted pink and green and then lit in order to highlight their otherworldliness. In the editing process, all the film was transferred to digital-Betacam video tape, treated to change the color grading or to repaint the colors, and then transferred back to 35 mm film. The super-saturated color results are extraordinary.

The plot involves a tried and true story of Dum, a young, steadfast and earnest peasant boy, who falls in love with Rumpoey, the pampered, headstrong daughter of a wealthy family. Though they vow to be together, they are separated, only to be happily reunited ten years later. Unfortunately, both their lives then take radical turns. Rumpoey is about to enter into an arranged marriage with a smarmy police captain, while Dum’s reaction to a tragedy in his life transforms him into the gunslinger, Black Tiger. But fate causes the couple’s lives to intertwine again…Can they find happiness? Or will tragedy overwhelm their love? No spoilers here.

The actors include several virtual newcomers in the main roles. The director, in an interview, said that he was “looking for people who had the charisma you used to see in film stars of the 1960’s.” He chose well, and the actors who play Dum and Rumpoey find the right level of exaggerated emotion. Some vintage stars are in supporting roles and, I presume, resonate with the Thai audience. The soundtrack combines Thai jazz and pop songs with the fiddling and whistling of Hollywood Westerns. The score is surprisingly effective and evocative.

Tears of the Black Tiger was a critical hit at the Cannes Film Festival in 2001, and the United States rights were acquired by Miramax. But Miramax, after changing the film’s ending, did not release it. Apparently, the delayed distribution of Tears of the Black Tiger caused it to acquire something of cult status. It was recently bought by Magnolia Pictures and is now being distributed nationally, with the original ending.

To cut to the chase…Tears of the Black Tiger is a success in its novel cinematic experiment in the use of color and atmosphere, but less successful as a parody or tribute. The early scenes are interesting and enjoyable. And then the novelty wears off, but the film doesn’t end.