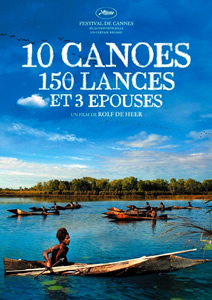 Run Time: 90 minutes, in Yolngu (an Australian Indigenous tribe) with

It is rare that film can transport its audience to a strange, unfamiliar,

yet entrancing world.Ten Canoes, an Australian movie that tells an ancient

Yolngu tale, presents such an extraordinary experience.With an all Yolngu

cast, and based on Yolngu myths and stories, as well as a irreplaceable

series of old photographs, Ten Canoes recreates the traditional life of the

tribe, its stories and its teachings.And it does all this while

entertaining and educating the audience.

The Yolngu, an Australian Indigenous tribe from Australia’s Northern

Territory near Darwin, have a long tradition of mythological storytelling as

a means of teaching each generation the tenets and laws of the tribe.Ten

Canoes, through its narrator, introduces such a myth, but it does so through

the device of an inner story that is a thousand years old.The narrator,

the stage at the beginning of the film:

…It is longtime ago. It is our time, before you other mob came from cross

the ocean…longtime before then. The rains been good and ten of the men go

on the swamp, to hunt the eggs of gumang, the magpie goose.One of the men,

the young fella, has a wrong love, so the old man tell him a story…a story

of the ancient ones, them wild and crazy ancestors who come after the spirit

time, after the flood that covered the whole land…It’s a good story, this story

I’m gonna be tellin’ you ’bout the ancient ones.There’s more wrong love in this

As an easy way to distinguish the two stories, the ten goose egg-hunting

canoers were filmed in black and white.Many of these scenes recreate the

Thomson, who worked with the tribe when life for the original inhabitants

was still traditional and barely influenced by the outside world.

The ancient myth, which is the heart of the movie, is beautifully filmed on

location in color.It is a cautionary tale about the evil that can befall

men when they let their passion and anger rule, rather then “they live

proper way.”And although the myth is replete with kidnappings, murder,

sorcery and taboo love, it does seem to move too slowly until its unexpected

ending.Although the narrator explains that the slow exposition of stories

teaches us patience, I would have liked to be patient at a little faster

Ten Canoes does not make the mistake of taking itself too seriously.The

narrator maintains a tongue-in-cheek, piquant attitude and there is much

lighthearted and earthy humor in the stories.