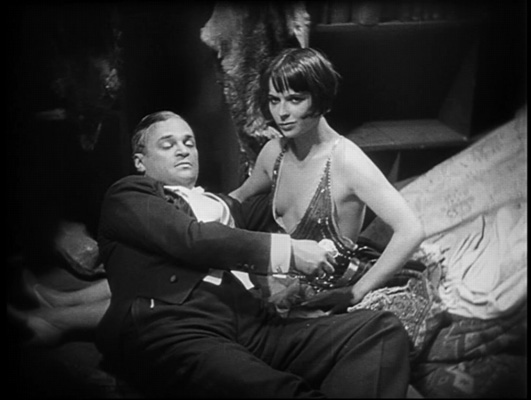 The thing about silent films, as anyone who saw last year’s Oscar-winning “The Artist” knows, is that they’re not silent at all. Music, either by piano, organ, full orchestra, or whatever, has always accompanied them.

That’s abundantly true of San Francisco’s annual Silent Film Festival, playing at the Castro Theater July 12th to 15th. Each film will be accompanied by an orchestra, ensemble, organ, or piano.

This year’s centerpiece (accompanied by Sweden’s Matti Bye Ensemble) is G. W. Pabst’s classic “Pandora’s Box,” starring the unforgettable Louise Brooks. An American actress who saw her greatest success in Germany, Brooks plays the amoral Lulu, who, after destroying several men, is herself destroyed. At 20, Brooks captured the screen like few other actresses before or since. The story, adapted from two plays by German playwright Frank Wedekind (also the source of Alban Berg’s 1937 opera, “Lulu”), is as unsentimental as its heroine.

“The Docks of New York” is an early film by von Sternberg, who went on to direct Marlene Dietrich in the much better known “The Blue Angel.” Its protagonists are tough-guy Bill Roberts (George Bancroft), a stoker (coal shoveler) on a freighter, and Mae (Betty Compson), a fragile-looking young woman who, as they used to say, is no better than she ought to be. Their romance, played out in a harborside dive, is both touching and realistic, and the shots of the ship’s boiler room and the smoky bar are full of von Sternbergian atmosphere. Accompaniment is by Donald Sosin on piano.

“South,” directed by Frank Hurley, is a British documentary about Ernest Shackleton’s 1914-1917 expedition to Antarctica. When Shackleton’s ship, the “Endurance,” was trapped and crushed by ice, Shackleton and a small group of men went in search of help—and found it, saving the lives of all the men. There’s nothing cinematically original about the film, but the images of icebergs, seals, dogs playing (the expedition carried 70 of them), and the shocking destruction of the ship are hypnotic. The film, restored in San Francisco, has preserved the original tinting. It is accompanied by Stephen Horne on piano with added narration by Paul McGann.

And—Felix the Cat, beloved for decades, in a program of shorts featuring the feline popular in cartoons and comic strips from the 1920s until he was overtaken by a certain mouse. “The Irrepressible Felix the Cat,” accompanied by Donald Sosin and the all-women Toychestra, will be free for children under ten—as are all the programs.

Many other goodies are in store for audiences at the SFSFF: book signings, restored shorts such as “Twin Peaks Tunnel,” a San Francisco documentary, and the newly restored “A Trip to the Moon,” by George Méliès; and special guests such as director Philip Kaufman and critic Leonard Maltin.

Further information and tickets can be obtained at the Silent Film Festival’s website at http://www.silentfilm.org/event-home.php