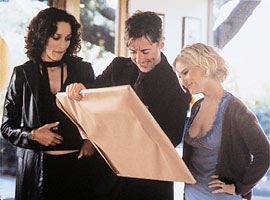 Joe Therrian (Alan Cumming), a novelist about to direct his first film, and his actress wife Sally (Jennifer Jason Leigh) are reconciling after a period of separation and have agreed to have a child. To celebrate their sixth anniversary they throw a party at their Los Angeles home, inviting their husband-and-wife business managers (John Benjamin Hickey and Parker Posey), the actress starring in Joe’s new film (Gwyneth Paltrow), and Sally’s current co-star (Kevin Kline) and his wife (Phoebe Cates), who is Sally’s best friend. Other guests include the director of Sally’s current film and his wife, Joe’s close friend and early love, Gina, and the next door neighbors with whom they have a running feud over the annoying barking of the Therrian’s German Shephard.

The Anniversary Party, co-written and co-directed by Cumming and Leigh, in part because it was shot using digital video cameras, will be compared to the Dogma film, The Celebration, another film pretty much entirely taking place at an at-home gathering. The central premise of throwing a bunch of people together for an hour or two of soul-searching or wart-revealing drama is an old one, particularly suited to the legitimate theater where the economy of a single interior set is an advantage. Three of the best films made in this genre originated as plays. Eugene O’Neill’s profoundly moving Long Day’s Journey Into Night peels away layer after layer of self-deception and intra-family protective lies to find the all too human frailties at the heart of the Tyrone family. In Who’s Afraid of Virginia Wolf?, Edward Albee puts two academic couples through an evening of progressively more vicious truth-telling. The result is a searing exploration of the psychological complexities that color these marital relationships. The Boys in the Band, though somewhat dated now, three decades after its release, dissects the characters at a gay birthday party with deliciously bitchy wit and what was for the time unprecedented honesty about gay life and a real understanding of the emotional cost of being different.

The other characters with major turns are equally neurotic, equally emotionally insecure, especially Claire (Jane Adams), who has become totally unnerved by her new responsibilities of motherhood. Speeding on diet pills, deep rings under her eyes, she starts out at borderline hysteria–where could she go from there? ("You look so well, Claire!" is the obvious hypocrisy with which she is greeted.) Somewhat more stable, the models of devoted parenthood, Kevin Kline and Phoebe Cates are left to fade into the background–stability does not make for high drama.

Minor characters act as either a bit of satire (Gwyneth Paltrow as the gushy starlet) or as foils (Jennifer Beales as Gina, Joe’s good friend). That as much energy is put into the petty feuding relationship with the non-show-biz neighbors as is put into the more serious dysfunctionswhich abound amongst established friends, colleagues and spouses is an indication of the thinness of the motivations and characterizations in the script. From the structurally demanded opening (guests arriving) to the game of charades to the guest-provided entertainment and toasts to the Ecstasy trip which will trigger crises for all, the scenario is skillfully programmed for ongoing action, if not for deeper probing into why these people are the way they are. By the time the melodramatic events of the last half hour pile on, it is difficult to give a damn about any of these selfish, emotionally needy neurasthenics.

The film stays afloat as entertainment for most of its length by virtue of reasonably regular doses of funny lines and through the skilled performances which make more of the underlying material than it merits. Leigh is more natural and appealing here than she has been in some of her tic-ridden past outings, but she cannot save her own script in the crucial climactic scene where her confession undermines any earlier credibility that the character or her relationship with Joe might have generated. For a script of this genre to work, the central secrets that are finally revealed must ring true as a result of being character-based and emotionally consistent with the peeling away process. The Anniversary Party seems, rather, to be groping for its next shocker, stretching for another dramatic point by dropping in convenient confessions, extraneous crises, and unearned emotionalism.