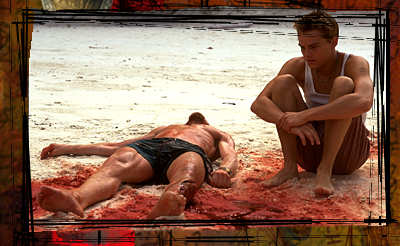 An internationally famous young star, a story rife with dramatic possibilities, and a natural setting that appears fit for only gods to inhabit &#150; The Beach has all of these assets, and it squanders them one by one like a salesman drinking on the company&#146;s dime. Director Danny Boyle and screenwriter John Hodge (working from Alex Garland&#146;s novel of the same name) have concocted an epic for pipsqueaks, a fairy tale for people who already believe in fairies.

Richard (Leonardo DiCaprio) is a disaffected 20-something who&#146;s traveling through Thailand. In a lazily written voiceover narration, Richard tells us that he&#146;s in search of experience, something intense enough to sweep away the cobwebs that come from living in a cushy high-tech society. His chance comes when a strung-out man in his hotel (Robert Carlyle, in a small part) tells him of a secret island paradise located in the Gulf of Siam, and gives him a map showing the way there. Richard convinces two other hotel guests &#150; a lovely French tourist whom he&#146;s smitten with (Virginie Ledoyen) and her boyfriend &#150; to join him. The trio makes its way to the island, where they find a land that&#146;s straight out of a Cheech and Chong hash dream: a marijuana field that covers the acreage of a midsize airport, a lake that&#146;s hidden to the outside world by a ring of jagged mountains, and a group of amiable misfits who live along its beautiful beach. The people refer to their colony as "the Beach," and their leader is a strong-willed pragmatist known as Sal (Tilda Swinton).

You know it&#146;s not your normal secret society when Richard and his friends are accepted almost instantly into the clan. The film becomes a summer idyll, as Richard kills a shark, finds himself being seduced by the Beach&#146;s most desirable women, and takes daily dips in the lake. But as in all dystopic fables, the good times come crashing down. Instead of unraveling due to an organic clash of personalities or philosophies as, say, an Aldous Huxley might have had it, the Beach falls apart when the outside world intrudes thanks to a wholly unmotivated action on Richard&#146;s part. The second half of this movie is a real drag, consisting mostly of Richard&#146;s exile to a little scenic overlook, where he descends to a state of primal being. ("Primal" being a relative term here: mostly he skulks around the brush wearing a headband, in one of the movie&#146;s many blasphemous allusions to Apocalypse Now.) Unsurprisingly, Leo&#146;s status as the world&#146;s leading box-office draw helps to snap Richard back to reality by the end.

The fun of taking in stories about imaginary societies, whether it&#146;s Lost Horizon or 1984, lies in the detailing given to the fictional world&#146;s values and customs, and what they reflect about our own reality. But what is this Shangri-la that Leo has stumbled into? In this case, Paradise means that a walk-on player has to cook your dinner while you play volleyball on the beach. We aren&#146;t ever given any meaningful information about the Beach&#146;s underlying philosophy; we aren&#146;t even told whether it stands for anything beyond its own self-preservation. Nobody ever comments on the sad fact that the Beach&#146;s inhabitants are still hamstrung by all of society&#146;s sexual hang-ups. (The women all keep their tops on in this island paradise, there isn&#146;t a gay couple in sight, and Sal&#146;s boyfriend is so threatened by Richard&#146;s presence that he crushes the newcomer&#146;s testicles with his beefy fist.) Is time still a concept on the Beach? How do these people resolve serious disputes? Didn&#146;t any of them ever want to have a kid, and how was the idea greeted when they brought it up?

It&#146;s even hard to see what the attraction of the Beach is beyond its setting. The inhabitants, far from being the rootless visionaries and adventurers you&#146;d expect to find in such a place, seem flaccid and superannuated, like the kind of people who keep hanging out on their college campus years after they&#146;ve graduated. (They don&#146;t even have interesting faces.) They&#146;re so intellectually barren, and such a bust in their relationships, that when Sal tells them, "We have so much here to inspire us," your eyes wander around the screen to see what it is she&#146;s talking about. Could she mean the bamboo tool shed? And at the end, after everything has fallen apart, there&#146;s no sense of loss, no feeling that a noble experiment has failed. It&#146;s just time to go back to the mainland.

This feeling &#150; that nothing of any real importance is at stake &#150; permeates every corner of the movie. Danny Boyle, in particular, has not covered himself in glory. With Shallow Grave and Trainspotting, he wrestled away the title of "Looking Good But Going Nowhere" from such formidable opponents as Sam Raimi and David Fincher. In The Beach his style is downright schizophrenic, a jarring back-and-forth between conventional directing and post-modern whimsy, and in the end nothing works. Boyle doesn&#146;t know how to build emotion in what are supposed to be the story&#146;s big moments, his action scenes lack snap and clarity, and his idea of a love scene is a slow-motion striptease set amongst a field of luminous plankton. Meanwhile, he coughs up a steady stream of tony camera angles and arty effects, such as turning Richard&#146;s run through the jungle into a video game, that shatter what little atmosphere he&#146;s managed to cobble together.

More important is Leonardo DiCaprio&#146;s apparent decision to retire from acting. He was simply phenomenal in What&#146;s Eating Gilbert Grape? and This Boy&#146;s Life; raw and instinctual, he was the greatest young actor we&#146;d seen in years. But here, in his first starring role since Titanic, he looks like he&#146;s been devoured by his heartthrob status. He has the same self-aware look in his eye whether he&#146;s being harassed by peddlers on a Bangkok street or collapsing on the sand after a taxing swim. He&#146;s a bag of jokey tics and poses, and his tics are the focus of every scene. The Beach doesn&#146;t deserve anyone&#146;s best effort, but how does DiCaprio expect to maintain the respect of anyone besides teenyboppers if he keeps this up? He&#146;s all of 25 years old, and he already looks like he&#146;s thrown in the towel.