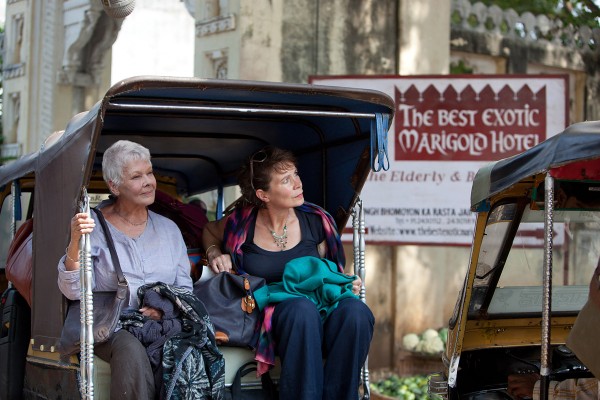 Especially when those doing the aging don’t have the money to age gracefully, or as gracefully as they’d like. As when they have invested unwisely, or not at all.

Such is the situation of several of the characters in “The Best Exotic Marigold Hotel,” directed by John Madden (“Shakespeare in Love,” “Mrs. Brown,” etc.) and featuring a cast of elderly British actors, no less splendid for their familiarity. Maggie Smith, Judi Dench, Tom Wilkinson–how can you miss with these stars in the cast, even though the story veers towards the hokey?

The old folks’ positions vary: Muriel (Smith) is told that she’ll have to wait six months to have a needed hip replacement in England, but that in India she can have one right away. Evelyn (Dench) finds that the late husband whom she trusted so deeply left her almost penniless. Douglas and Jean (Nighy and Penelope Wilton) are put off by the emergency button and round-the-wall railings in the retirement apartment they’re shown. Norman (Ronald Pickup) and Madge (Celia Imbrie), both single, are eager for adventure and possible new conquests. Graham (Tom Wilkinson), a newly retired judge, wants to return to the India where he grew up and had a life-changing romantic experience.

Each is seduced by advertisements for a luxurious retirement hotel, the Best Exotic Marigold Hotel, in Jaipur, India. The hotel, predictably, turns out to be a decrepit wreck with more cockroaches than working telephones, whose elegance is all in the imagination of its young manager, Sonny (the charming Dev Patel).

And also predictably, the India experience transforms each character. One mellows in her racist attitudes, even agreeing to eat some “native” food (“If I can’t pronounce it, I don’t want to eat it”). One hardens in her hatred of the country, but turns into a mensch, or something closely resembling one, at the end. One gets a job, the first in her life. And so forth. Even Sonny, the hotel manager, develops some backbone (with the help of one of the residents), enabling him to stand up to his domineering mother.

The film’s India is a wild, colorful place, appealing to some, frightening to others. Although we get the expected brilliant colors and–yes, exotic–sounds, there’s also the modern India of traffic jams and call centers. It’s all a bit too tourist-brochure-like, with poverty, social rigidity, the caste system, and other unsavory facts of life tucked back into the corners.
I for one found the characters’ appeal transcending the story’s predictable turns, and the message that courage will triumph hard to resist.