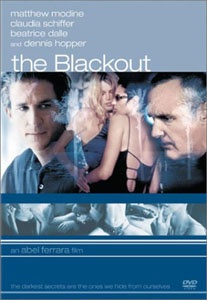 Abel Ferrara’s movies are often much more than they seem. He routinely transcends his seemingly genre-bound storylines. While he may appear to be making a "gangster movie" (King Of New York, The Funeral), or a "cop movie" (Bad Lieutenant), or a "vampire movie" (The Addiction), there are entire worlds being explored. He works quick and hard, typically shooting his movies in two to three weeks, which is reflected in the edgy jumpiness of the eventual product. Ferrara is never interested in letting his audience relax.

The Blackout is the story of Matty (Matthew Modine), a drug- and booze-addled Hollywood star who follows girlfriend Annie (Beatrice Dalle) to Miami, where she’s working on a video project for a somewhat crazed, if generally harmless, filmmaker, Mickey (Dennis Hopper). Matty and Annie fight, and Matty catapults himself down a well of booze and cocaine (at one point passing out in a bathroom, completely wasted on crack). He blacks out, and when we meet him again it’s eighteen months later and he’s living in New York. Annie’s gone; Matty’s new girlfriend is clean and sober Claudia Schiffer. He’s trying to embrace his new, AA/NA life, but is plagued by nightmares which eventually draw him back to Miami and right back into the squalor of his past.

As Matty, Matthew Modine is phenomenal. He seems more involved in this role than anything he’s done since Full Metal Jacket. When he returns to Miami, and within hours is drinking and drugging as though he’d never quit in the first place, the viewer’s heart wrenches for him. Simultaneously, though, his character is that of a pathetic, self-involved fool, who drags all those around him down as he collapses in on himself. Ferrara allows plenty of chances to scorn Matty along his inevitable slide toward destruction. Matty has convinced Annie to abort his child, and doesn’t even remember doing so; Beatrice Dalle is fascinating to watch, as she goes from despair and rage to contempt when she sees what he’s become upon his return to Florida. Sarah Lassez is heartbreaking as another, far more innocent Annie, who allows her infatuation with Matty to draw her inexorably into the film’s central tragedy. Dennis Hopper and Claudia Schiffer are adequate, but little more. Schiffer, in particular, seems like a place-holder; someone had to play the character, so why not get a pretty blonde? Hopper’s rantings as the film grinds towards its conclusion are stagy and weak, but the strength of the shock just received carries the scene through despite him.

Interestingly, though Ferrara has always been lauded for his ability to film the streets of New York, it’s the Miami sections of the movie that are the most viscerally exciting. The New York of Matty’s attempted resurrection is nowhere near the mean streets of other Ferrara films; it seems borrowed from the work of Edward Burns or Whit Stillman. Within a few minutes, the viewer is rooting for Matty to fall, just so we can go somewhere exciting again.

Ferrara’s cinematic territory is always deeply moral, but he explores it in the spirit of Heironymous Bosch rather than Thomas Aquinas. He thrusts the viewer face-first into human degradation, and the question of whether or not he endorses his characters’ behavior is ever-present. The Blackout isn’t as grimy a wallow as Bad Lieutenant, but it’s an equally accomplished film. Its looping structure and highly symbolic ending are the signs of a director who is no mere sleaze merchant, but who, rather, is attempting to get to the bottom (in a few different ways) of the human spirit.