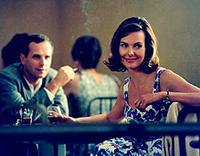 Even behind the main titles, Depardieu begins addressing his theme. The camera lingers on a plain, contemporary building before pulling back to show the theater across the street, "Le Royale"–an ordinary, nondescript building contrasted with the fantasy world of the movie palace, the place where escape from the commonplace is found. The audience is dispersing after seeing Jules et Jim, Francois Truffaut’s brilliant 1962 film about a woman involved with two men. "Good movies make me feel good," says Mina (Carole Bouquet), who attends with her fifteen year old son, Tommy (Stanislas Crevillen).

Depardieu is her husband, George, whose masonry business has failed, leaving him unemployed. When Mina takes a job as a domestic in a grand home, George objects. He finds it demeaning and it conflicts with what he has worked hard to build–a business, a home, a middle-class family. He then takes a laborer’s job building a bridge some distance from their town; it’s too far to commute so he stays in the laborer’s dormitory during the week. "What’s this bridge for?" he asks a tad obtusely, but connecting is not George’s strong point.

At another film show, this time West Side Story, Mina finds herself crying along with a stranger in the next seat who turns out to be Matthias (Charles Berling), a civil engineer also working on the bridge. There’s chemistry between them. Mina’s initial reaction is to remain faithful to her husband, to protect the status quo of her family. But when Matthias persists at a chance later meeting, she lets herself go. While it is clear that Mina and George love one another, George’s limited horizons and lack of imagination have left Mina vaguely unfulfilled. Matthias, although himself married, offers both passion and the broadened horizons of upward mobility.

Step by small step the affair develops and is inevitably found out. Depardieu, credited as co-director with Frederic Auburtin, draws performances from himself and his talented cast that catch the often unarticulated subtleties of feelings and the complications of the family relationships. Their responses to the changing situation are supported by carefully developed motivations. With a gently bittersweet tone, the film takes a nonjudgmental stance; its convincingly real people in real circumstances lend a sense of inevitability to the outcome.

The Bridge, based on a novel by Alain Leblanc, builds its effect in part by skillful observation of telling details. When Matthias and Mina make love, they acknowledge that they know nothing about one another. That they are virtually strangers to one another adds fuel to their mutual passion; the initial rush of their affair is ecstatic. And Mathias continues to court Mina, to offer her the attention that George seems now only to offer to his vegetable garden. When Mina realizes that she will have to make a choice, she escapes once more to the movies.But she can’t avoid the pain that her decision will cause; while the audience laughs at the comedy, she once again sheds tears. The difference is that this time the tears are for her own circumstances, not for a fiction on the silver screen. It is painful, but she is re-engaged.

Stylistically, The Bridge, a straightforward narrative, could have been made in the early 1960’s, the time in which it is placed. The skill of its storytelling, its perceptive observation and character building, and its disciplined refusal to be tainted with sentimentality add up to a thoughtful and wise film.