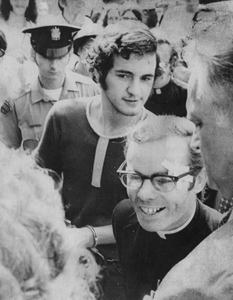 A documentary by Anthony Giacchino

The advertisement for Anthony Giacchino’s first feature length documentary, The Camden 28, poses an interesting question- "How far would you go to stop a war?" In this case, the war is Vietnam and the stoppers are twenty-eight profoundly religious men and women. Most are Catholics, some are priests and ex-nuns, all are imbued with deeply held moral-spiritual-religious values and commitments that require them to act. And act they do. In the summer of 1971, they break into the draft board of Camden, New Jersey, destroy draft records, get busted by the FBI, and are charged with crimes that could send each of them to prison for forty-seven years. In telling the story, Giacchino does a fairly solid job. In raising the larger issues about breaking the law and stopping wars, he barely scratches the surface. But the details of this case are so compelling that it’s a mesmerizing tale.

At one of the meetings to plan the action at the draft board, the conspirators moved to a large table to continue their discussions. Thirteen of the men sat around it (and no, the film never comments on the dynamics between the men and women). And one person wondered if, like at the Last Supper, there was a Judas in their midst. There was. His identity is delightfully concealed for the first half of the film. And after the arrests and during the trial this informant becomes involved in subplots that are nothing short of astonishing. Every aspect of this character’s story would seem too unbelievable if it weren’t all true.

Another fascinating dimension involves the twenty-eight once they become defendants in the criminal trial. Imagine a group that size- all of whom are bright, articulate, passionately committed to their vision of what’s right, concerned with the political implications of everything they do, and facing nearly a half century in federal prison. By consensus, a process to which they are committed, they have to decide: should they use lawyers or represent themselves? What strategy should they pursue? They would love to be acquitted by persuading the jury of their stance on the War, but absent that- should they use legal tricks to their own advantage or bear witness to what they have done and accept the consequences? Or is there another alternative? When the Justice Department of Attorney General John Mitchell and the FBI of Director J. Edgar Hoover offer them a plea bargain that could spare them decades in jail, should they shake hands with the devil? How can twenty-eight such defendants ever agree on any these kind of issues?

Giacchino has created a film in which every practical question has ethical implications. In the universe of this trial- where winning isn’t the only thing (perhaps not even the most important thing)- we have to recalibrate our thinking about what we most want and most dread. And in the context of a larger anti-war movement where parts of it were hostile to the very Church in which these defendants found their values and inspiration- how do we feel about their religious orientation? The Camden 28 opens our thinking to the values and calculations which guided these noble activists and their equally noble attorneys.

It’s hard not to like this film for all of these reasons. But the film isn’t without flaws. One huge miscalculation involves introducing a 1998 reunion of the defendants into the middle of the 1973 narrative. Very little is done to generate much suspense about the trial’s outcome. We’re told that these defendants represent the "Catholic Left," but they don’t seem very Catholic or very Left. Almost every religious principle they express is indistinguishable from what liberal Episcopalians, Reform Jews, and Unitarians were saying. And their politics don’t seem "left," but simply good, decent, and humane. Nothing wrong with that, to be sure, but it would deepen the film if we understood what it meant to be in the Catholic left.

One of the basic defense strategies was jury nullification, a tactic which is always forbidden in a criminal trial. The jury is encouraged to refuse to convict (nullify the law) in instances where the law would punish someone for doing the morally right thing (as nineteenth century juries did when they refused to convict those who helped runaway slaves). But if jury nullification sounds like a good idea when dealing with slavery or Vietnam, it sounds horrendous when used by racist Southern juries to not convict KKK members. Imagine xenophobic juries exonerating vigilantes who go after illegal immigrants. The film does not address the complexities of this legal issue and its deep moral implications.

And the film takes a free pass on the hardest question posed in the ads- "How far would you go to stop a war?" An essential part of this question is which war? A film about Catholics must know that there’s a tradition going back to St. Augustine which distinguishes between just and unjust wars. Vietnam was unjust by almost any criteria. But NATO’s use of force in Kosovo? Toppling the Taliban in Afghanistan? Would these defendants have opposed our killing people to stop the genocide in Rwanda or the Sudan? Were our defendants, like Christ, opposed to all wars or only Vietnam? And why?

And beyond which war, what about the questions of "how far?" These men and women were willing to destroy draft files, but would they blow up draft boards? Of the hundreds of actions taken against draft boards, some involved publicly acknowledging and "witnessing" one’s actions, while others tried to "get away with it." Which type of approach is morally and/or tactically better? These issues of what constitutes an unjust war and how to oppose it are never deeply considered in the film, and they should have been; they were certainly at the heart of the defendants’ and the lawyers’ thinking. That being said, it’s impossible not to be caught up in this tale and not to be fascinated and moved by people who will go very far indeed on behalf of the civilians and soldiers who pay the ultimate price of war.