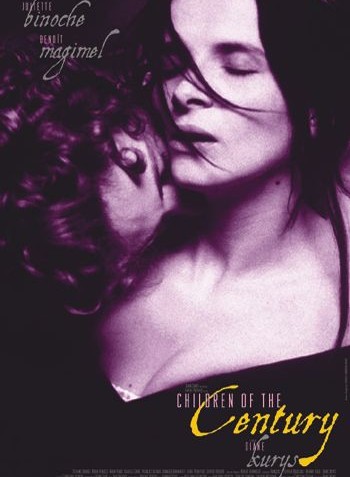 The Children of the Century (Les Enfants du siecle) (2002)

While Victor Hugo is generally considered to be the father of French Romanticism, no figure better symbolizes the movement in the way she lived than the novelist George Sand. Separated from her husband early on, Sand lived an independent life both professionally and sexually that was scandalous to the staid French haute bourgeoisie. She smoked and wore men’s clothes and advocated free love, while carrying on a series of very public affairs.

Sand’s liaison with composer Frederic Chopin has been memorialized by such films as A Song to Remember, in which Merle Oberon played the role, and the more recent and far superior Impromptu, with Judy Davis doing a star turn as Sand. Both films include as a minor figure Alfred de Musset, the poet and playwright who preceded Chopin in Sand’s affections. The Children of the Century, a new film by Diane Kurys (Love After Love, Entre Nous) is centered on the earlier relationship with Musset, while Chopin is relegated to a nonspeaking cameo.

Musset wrote a novel about their affair, The Confession of a Child of the Century. Sand covered the territory in her novel,She & Heand in her journals and there are published letters and biographies of both, providing a wealth of raw material from which the screenplay could draw. When they met, Sand was 29 and Musset was 23. Their age difference was only one of the grounds on which Musset mere vigorously opposed their affair. Initially they shared their literary interests, but the strong chemistry between them inevitably ended up in passionate intimacy. Before Sand meets Musset, Kurys shows her reading to a literary salon, stating that men were unconcerned with the physical pleasure of women. Musset, and the heated passion generated between the two, surely changed her mind. "You taught me to love, heart and soul," she says later on.

They travel to Venice together, but even en route, Musset reverts to philandering ways. He is revealed to be a whoremonger and a gambler and he dabbles in opium as well. He is also portrayed as alternately abusive and repentant towards Sand; it’s hard not to think after a while that his mother was right in opposing the relationship. Not, of course, because of anything wrong with Sand as she would have it, but because her son is an irresponsible, spoiled and self-indulgent adolescent masquerading in the body of an adult.

While allowing Sand shelter in the arms of an Italian doctor, Kurys depicts her as consistent in her love for Musset, despite his intolerable behavior. The portrayal of this strong, independent woman remaining so attached under the circumstances is, in part perhaps, meant to be areflection of the over-the-top romanticism of the period, the exaltation of passion above all else. (Sand doesn’t fit the contemporary picture of the abused wife unable and unwilling to split with her partner.) But, the repeated breakups and reconciliations that stretch the film unnecessarily beyond a length appropriate to its content becomes tiresome. The imbalance in the relationship unbalances the portrait of Sand as well.

Nonetheless, there’s much to bolster the proceedings, especially the performance of Juliette Binoche (Chocolat, Alice and Martin) as Sand; she emanates both the intelligence and the passion of the writer with an edge of wit always present. Benoit Magimel (The Piano Teacher, A Single Girl) makes a convincingly passionate lover as well as an annoying heel. Costuming by French couturier Christian Lacroix is a knockout and period interiors are handsomely realized. Indeed, all the production values are first rate; it’s the script here that undermines the film, getting befuddled in its characterizations as it begins to seem as long as the two year affair which is its subject.