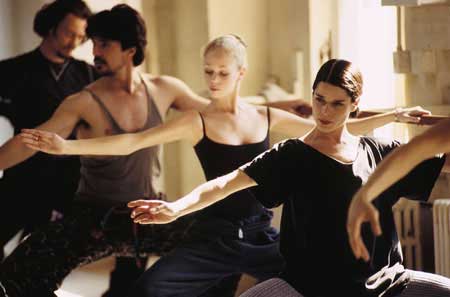 Director Robert Altman continues in his erratic and unpredictable ways. He has enough masterpieces under his belt to match any of his peers, but he also turns out his share of disappointing duds along the way. Will he ever be forgiven Pret-a-Porter? Maybe that misstep about the fashion industry foretold the disappointment that is The Company, the subject of which is a ballet troupe. At least the former film had a sense of humor. From his triumphant, Oscar-nominated Gosford Park, Altman has slipped inexplicably with anunsatisfying film, especially distressing in view of what it might have been.

With the Joffrey Ballet of Chicago cooperating, Altman’s stated intention was to make a film that would "show this world with all of its contradictions." He chose not to make a documentary (although some of The Company has the texture of a documentary), but a fictional drama and the resulting film works as neither.

Nearly plotless, The Company plays as if screenwriter Barbara Turner sat down with dancer/actor Neve Campbell and drew up a checklist of all the things they wanted to show about dancers and a dance company. There’s no narrative momentum whatever and little character development. There are snippets of choreographers making ballets on the dancers, rehearsals, classes, injuries, sore feet, the dancer who is dropped, the union grievance, hard partying, the missed date–all the predictable observations.

Malcolm McDowell plays the company director in a flamboyant, single-note performance singularly lacking in depth or imagination. When he recites the names of dancers who have died of AIDS (another item on the checklist), it is spoken with such an astounding lack of feeling that he should be getting nasty letters from Act Up. And while the film shows the love life of the female dancers (Campbell’s affair, another woman’s wedding, a third borrowing a condom), the gay men are never once acknowledged to have romance, only to have a disease.

The best parts of the film are a number of dances shown in varying degrees of length. There are some stunning excerpts from an Alvin Nikolais dance which has the dancers manipulating broad ribbon-like bands of fabric, making changing geometric patterns and, at the same time, giving a sense of the dancers inextricably caught up in the fabric like marionettes or victims of a spider caught in a web. There’s a lovely pas de deux by Campbell and Domingo Rubio, danced to "My Funny Valentine."

But there are major problems putting dance on the screen, especially in the context of a "drama." Dance is meant to be seen full on; the line of the dancer’s body, from extended fingertips to pointed toes, is a tool with which the choreographer creates visual compositions through patterns of movement. Filmmakers (including Altman here) are more concerned with a beautiful picture on screen, so they have no compunction about cutting off heads or feet, about zeroing in on the specific while losing the overall view of the ballet. Then there are obligatory shots from the wings or from above which break any integrity in the presentation of the dance. These dances on film are to dance what Readers’ Digest abridged books are to literature.

While "My Funny Valentine," is danced outdoors right through a rainstorm, Altman interrupts his shots of the dance with gratuitous business around McDowell’s concern’s that the dancers should stop if there is water on the stage. A legitimate concern, of course, but dramatically not significant, while breaking the mood of the dance and the beauty of the moment.

As drama, The Company is dead in the water, as it were, and as documentary it reveals only the most obvious points, none in depth. For an in depth look at dancers and their lives, watch Etoiles: Dancers Of The Paris Opera Ballet, a documentary that is informative and provides a strong sense of dancers as people&#151;people with real lives, not soap opera stereotypes.