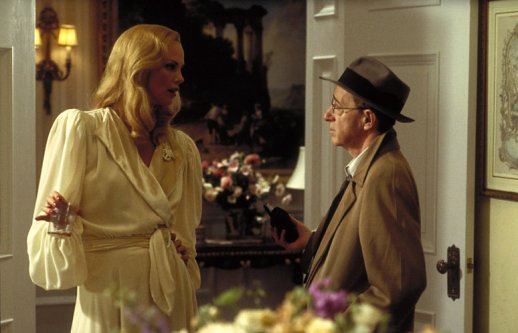 In The Curse of the Jade Scorpion, Woody Allen plays CW Briggs, insurance investigator for slipping company Northcoast in early 1940s New York. Northcoast CEO Chris Magruder (Dan Ackroyd) has hired his mistress, Betty Ann Fitzgerald (Helen Hunt), an efficiency expert, to make improvements. This immediately propels her into a clash with the indignant Briggs, whom she labels a &#147;shallow, skirt-chasing egomaniac.&#148; He responds telling her she needs to relieve her uptightness with a "roll in the hay."

At the birthday celebration of their colleague, George Bond (Wallace Shawn), Briggs and Fitzgerald are enticed to be volunteers for the hypnotist Voltan Polgar (David Ogden Stiers). Polgar hypnotizes Briggs and Fitzgerald with a jade scorpion, making them think they are lovers stranded on a desert island. Afterwards, the two of them become susceptible to suggestion whenever Polgar utters a trigger word to them. Because Briggs sets up the security systems for the wealthy who insure with Northcoast, Polgar uses the hypnotized Briggs to steal millions in jewelry from them because Briggs knows how to bypass the security. Briggs remembers nothing, and he unknowingly winds up chasing the culprit who is himself. One byproduct of the hypnosis that furthers confusion is that whenever Briggs or Fitzgerald go under, they are back to being in love with each other.

Once this whole setup is complete, it becomes clear where it all has to go, but Allen is able to sustain the shenanigans far longer than might be expected.Allen clues the audience in from the beginning.Meanwhile the characters are constantly on the verge of uncovering the plot only to fail each time. Allen pulls this off in a way that might be frustrating to some and playful to others, but it almost always makes narrative sense. Sure, the hypnosis device is out of something like Abbott and Costello, but at least it works better than Allen returning to jokes about astrology or polo mallets.

Early on, an Annie Hall-like flashback portends Allen returning to his usual bag of tricks, and he does. There is the subplot of the man and woman who cannot get along until suddenly romance blossoms between them (Sleeper, Manhattan), as well as the usual Hitler and Mussolini jokes (every Allen film). A good way into the movie one worries whether Allen, who has always noted the influence of the Marx Brothers, is now paying homage to those boring plot-development sections in their films.Needless to say, Allen has not been on a roll lately.Aside from Husbands and Wives and Deconstructing Harry, the entirety of the 1990s was filled with mildly diverting works like Everyone Says I Love You or downright stinkers like Sweet and Lowdown. Scorpion at least falls into the former category.

The underrated Charlize Theron, bewigged to look like Veronica Lake via Kim Bassinger from L.A. Confidential, is essentially playing Martha Vicker&#146;s role of Carmen Sternwood from The Big Sleep. One of the highlights of Scorpion is the Big Sleep-inspired pitter-pat dialogue exchange between Theron and Allen when their characters try to seduce each other. Hunt, on the other hand, gets a lot of clunkers, especially compared to Allen himself. Still, Hunt brings just enough intensity to the role to make the audience believe how Briggs can find her both romantically attractive and shrillingly repugnant.

Allen is not as funny as he once was. In his 70s films, the jokes came flying so fast and furious, some were bound to reek, but he could still keep up some kind of a ratio like three zingers to one bomb.These days, he gets three groans to one mild guffaw.All the same, he has his moments in Scorpion.After Fitzgerald says she is afraid of catching something from Briggs&#146; bedroom, he responds, &#147;Germs can&#146;t live in your blood stream. It&#146;s too cold.&#148;

The Curse of the Jade Scorpion is a throwback to an earlier type of moviemaking and it features nothing original. By the end however, it feels refreshing if accepted as nothing more than a light-hearted romp. Scorpion lacks today’s hip irony and overt reflexivity. Its narrative gimmick is one of genre convention, not self-conscious pretension (e.g., The Sixth Sense, Memento).Allen actually pays attention to story construction. The narrative coheres and the strands all wrap up neatly. That is a blessing in a summer with the likes of Planet of the Apes and Rush Hour 2, in which stunts take precedence over logic. Unlike those movies, The Curse of the Jade Scorpion achieves actual charm.