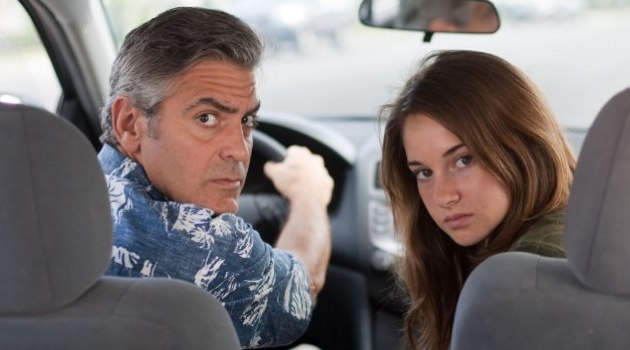 Alexander Payne returns to directing with “The Descendants” after a seven-year hiatus following his remarkable “Sideways” in 2004. Even though, Payne only had four previous feature films under his belt—”Citizen Ruth,” “Election,” “About Schmidt,” and “Sideways”—they are an impressive and consistent body of work. Now Payne, having spent almost as much time off as he spent making all his other films put together, turns “The Descendants” into his most highly anticipated movie. As it turns out however, what brings Payne back, a story from Kaui Hart Hemmings’ novel of the same name, lacks dramatic urgency, and though far from a bad movie, “The Descendants”‘ main draw is the outstanding performance of its cast.

“The Descendants” is so named because our protagonist, Matt King (George Clooney), has for his great-great-grandmother the Princess Margaret Ke’alohilani. With Hawaiian royalty in his ancestry, his family has inherited 25,000 acres of pristine land worth hundreds of millions of dollars. With his father’s death, Matt is the sole trustee left with the decision of what to do with the land. As it happens, he is a real estate attorney. While his cousins have whittled away their trust funds, Matt has been stingier with his money to the consternation of his father-in-law (Robert Forster). Now all his relatives are pushing him to sell.

The movie opens with Matt’s wife Elizabeth (Patricia Hastie) in a coma following a boating accident. To deal with his dying wife, Matt retrieves his older daughter Alexandra (Shailene Woodley) from boarding school to rejoin the family, which also includes younger daughter, 10-year old Scottie (Amara Miller). Matt’s marriage has been rocky, but the accident motivates him to rejuvenate his duties as husband and father. That’s when Alex drops the bombshell that Elizabeth has been cheating on him.

From here the movie’s primary narrative hook is Matt’s pursuit of his wife’s lover Brian Speer (Matthew Lillard) and figuring out how to confront him. Matt drags his daughters along and Alex brings her friend, a comic-relief pothead named Sid (Nick Krause). The secondary narrative concern is what Matt will decide to do with the land. The problem is neither Speer nor the land story arcs feel like the stakes are very high dramatically. So all that’s left is our desire to spend time with these characters.

Luckily for Payne, characterization is his strength, and Woodley and Judy Greer (playing Brian Speer’s wife Julie) are especially strong. As Woodley’s first big film role, this could be a well-deserved breakout performance for her. Greer brings a likeable effortless grounded charm. Krause is amusing, but his character feels shoehorned into the proceedings, and Miller is mostly reduced to cute jokey retorts. Clooney has developed into one of our finest actors since his one-note E.R. days, and his performance is terrific here. Only, he still seems too handsome and elegant for this everyman role despite hair and make-up working to turn him into a more average Joe and his adopting an overly clumsy-looking run. He’s still George Clooney, world class movie star, underneath.

The movie starts with voice-over narration from Matt that doesn’t really work. He intones dialogue like “What is it about the women in my life wanting to destroy themselves?” that’s too self-consciously literary and pointed. Thankfully Payne drops the voice-over as the film progresses. He seems out of practice as scenes don’t build to a pop but tend to fizzle out, and Payne squeezes Hawaiian music into every shot he can even when the movie needs to be more quiet. “The Descendants” also isn’t quite as funny as his other films. Inspired moments of direction like Alex’s reaction to her mother’s impending death manifesting as an underwater silent scream are few and far between.

Even as Payne’s weakest film however, “The Descendants” is still worth seeing. Payne’s work has always been marked by the complicated ambivalence of everyday life situations and by vibrant characters, and that’s still the case here, which makes “The Descendants” stand out above your average Hollywood fare.