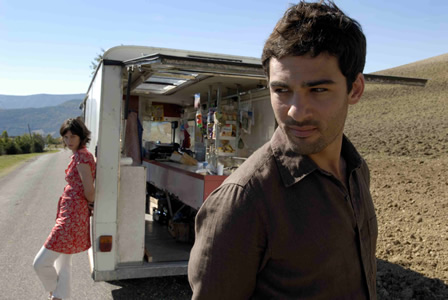 Despite its rather well worn premise of a prodigal son returning to his family home after a long period of self-imposed exile, this charming French film actually feels quite fresh and original. The director, Eric Guirado, who has a background in documentary films, brings an unscripted quality to many of the scenes, especially those involving the old folks who populate the Provencal villages where The Grocer’s Son takes place. These frail, hard-of-hearing villagers are the real thing, and their presence adds emotional depth to an otherwise mundane message. But the movie’s main appeal—and most likely its main box office draw—has as much to do with its appealing young stars as anything.

Nicolas Cazalé is extremely handsome (think the young Alain Delon), and his low-key performance in the title role is a model of contained passion. As his love interest Claire, Clotilde Hesme has an unconventional beauty, and a face that expresses a wealth of intelligence, compassion and openness, especially when she smiles. Their performances are extremely watchable, and for some, getting to know these two actors may be reason enough to go see this film.

Cazalé plays Antoine, a solitary and taciturn young man who has just lost another job as a waiter in Paris. The son of a small-town grocery store owner, Antoine hasn’t seen his family in nearly ten years, and when his mother suddenly appears at his door to tell him his father has suffered a massive heart attack, and she needs him to come home to help out in the family business, her son barely shows any emotion at all.

When Antoine finally decides to return home to help out, it’s at least in part because he thinks it might be a way to capture the attention of Claire, who has so far chosen to avoid any of the miniscule overtures his closed-off manner has allowed him to exert. Claire is adrift herself, studying for her college entrance exams, so when Antoine asks her to accompany him, she accepts.

Transported to the bucolic surroundings of a section of Provence that has not yet been taken over by foreign tourists and wealthy second-homeowners, Antoine takes the grocery van on its daily deliveries to the old people too feeble to make it to the family store in town, while Claire stays in a room above the store studying. At first, Antoine’s gruff manner alienates the old folks, and he finds himself at odds working a job that demands at least a minimum of social graces. His curtness puts off patrons, until Claire starts accompanying him on his deliveries, showing him that a little friendly compassion can go a long way.

When the father finally does come home from the hospital, there is a very tense and telling scene at the dinner table to celebrate his homecoming. The air is thick with unspoken bitterness, the son seething in silence, an embittered yet repressed older brother resentful of Antoine’s sudden reappearance, the father needling him and bossing the mother around, and the mother trying to keep the peace. It’s your average family, really, dysfunctional for reasons that are such an integral part of the family dynamic that no one knows how it started, or how to stop it. One can easily point a finger at the father, whose harsh patriarchal tone conjures centuries of male dominance in rural societies. To its credit, the film doesn’t take sides, however. Families are much more complicated organisms, as we later become aware.

Needless to say, the atmosphere eventually unsettles the independent Claire, and without her presence, Antoine must face his inner, and outer, demons. Nicolas Cazalé’s sensitivity finally surfaces, and the movie turns quaintly sweet. A bit too saccharine for some tastes, but Cazalé should be given credit for making it all look genuine.

In an odd bit of filmmaking, the story’s denouement is shown in a quick succession of brief scenes during the end credits. These neatly tied-up happy endings feel like afterthoughts, a little candy for the audience before they leave the theater. This might go over well with viewers who need some candy with their movies, but this reviewer felt gypped. Still, the film has some exhilarating freeform moments that recall the late, great Claude Sautet, it’s a moving tribute to a way of life that is fast disappearing, and it showcases the talents of two fine young actors. In a world where there is easier access to more films for every taste, this might be the one you need for that as yet unplanned weekend night. If it’s not at a theater near you, there is now the Internet. Just go to http://www.filmmovement.com/and buy it.