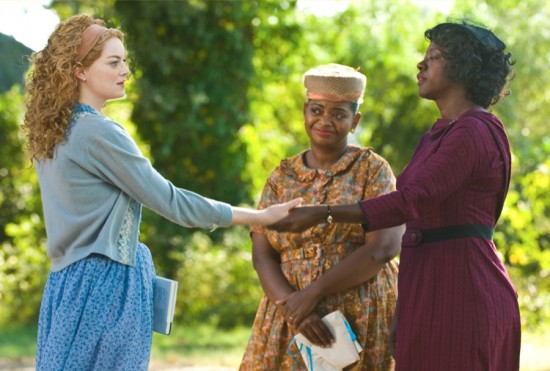 I inhaled Kathryn Stockett’s best-seller, “The Help,” over one short weekend a year or two ago. Though the novel won’t go down in the annals of classic world literature, it’s a piece of high-class chick lit (the few men in it play trivial roles) that-obviously-kept me turning the pages at a breeze-producing pace. The novel has conflict, engaging characters (plus hiss-worthy villains), and a social theme that hasn’t lost its potency despite the fact that the action is set about 50 years ago.

So of course I was waiting eagerly for the film version, directed and co-written (with Kathryn Stockett) by Tate Taylor (an actor, and director of “Pretty Ugly People”). I wasn’t disappointed. A high-class chick flick, “The Help” won’t go down in the annals of classic movies. Sticking close to the original, it has conflict, engaging characters (played by an outstanding cast), and that social theme. Aside from some implausible situations-which I won’t mention for fear of ruining the suspense-it’s a fully satisfying movie, especially if you’re female and have a social conscience.

The action is set in Jackson, Mississippi, in the early 1960s on the verge of the Civil Rights movement. All of the middle-class white families employ black maids, whose responsibilities usually include raising the children, taking care of the household, cooking, doing the grocery shopping…. They’re treated with condescending kindness—sometimes—but with no respect, and they have no rights whatever.

Eugenia “Skeeter” Phelan (“Crazy Stupid Love”‘s Emma Stone), a recent college graduate, has returned home to her mother’s (Allison Janney) house determined to be a writer. Inspired by the seeming impossibility of finding out what ever happened to her parents’ maid, a second mother to her whose existence seems to have been swept under the rug, Skeeter wonders if she could get the maids of her old friends, now all married, to tell her what their lives are like. Of course the maids, afraid of getting into trouble (having your house burned down is not out of the question), refuse—at first.

In the meantime, Skeeter gets a part-time job at the local newspaper and continues to attend the Junior League functions at which her friend Hilly Holbrook (“Hereafter”‘s Bryce Dallas Howard) proposes a local ordinance that would make it mandatory for white employers to build separate, outdoor toilets for “the help.” When pressed to write up this notion in the organization’s newsletter, of which she’s the editor, Skeeter rebels in a sensational way. The bridge luncheons and other ladylike functions, with all the “girls” (except Skeeter) in their beehive hairdos and pouffy dresses, are a hoot. But Hilly is too stereotyped a villain-a female Simon Legree.

After one of the maids, Minny (Octavia Spencer), is unjustly fired and blackballed, all the maids, led by the sensational Viola Davis as the strong-willed Aibileen, agree to participate in Skeeter’s project. There’s a subplot about Skeeter’s friends’ and her mother’s efforts to marry her off, and another, very amusing one, about a social outcast (Jessica Chastain) who hires the equally outcast Minny and tries to win the acceptance of the other “girls.”

The acting is convincing throughout, with Emma Stone, Viola Davis, and Octavia Spencer turning in especially noteworthy performances. And it’s rewarding seeing some of our old favorites—not only Allison Janney, but also Cecily Tyson, Sissy Spacek, and Mary Steenburgen in small though important parts. Chris Lowell has a bland role as Skeeter’s maybe-yes-maybe-no suitor. Set and costume design are outstanding, and Tate Taylor’s direction keeps the action moving energetically.