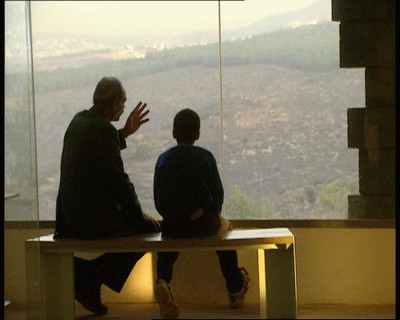 Israeli media called Ra&#146;anan Alexandrowicz&#146;s documentary The Inner Tour &#147;subversive and treacherous&#148; according to press notes. Watching this relatively low-key film, it would seem anything but that, unless giving a human face to the &#147;enemy&#148; is considered unpatriotic. Despite times being what they are with President Bush decrying an Axis of Evil or Ari Fleischer warning &#147;watch what you say,&#148; one hopes only the most apprehensive fascist would construe alternative perspectives as treasonous.

The Inner Tour follows a group of Palestinians &#150; about half a dozen adults accompanied by roughly the same number of children &#150; from the West Bank on a sightseeing trip of Israel. The filmmakers obviously hoped to get a Palestinian point of view on the land that they want back. The three day tour consists of two days of tourist attractions around Galilee and one day in Tel Aviv. While the film shows the group riding gondola cars, checking out a sea grotto, and visiting an amusement park, clearly Alexandrowicz wants more politically substantive material. A trip to the beach proves uneventful except for the Palestinians eliciting a few stares from wary Israelis. Slowly the tourists open up to Alexandrowicz. One woman talks about how her son, Mahmoud, was renamed Halil, after his father who perished in the conflict. An old man, Abu Muhammad, narrates his participation in the 1948 war in which he lost both his parents as well as his son and daughter. Everyone in the tour however has had a family member who has died from the Israeli-Palestinian conflict or knows someone imprisoned by the Israelis.

Everywhere they go, they cannot help but see what they view as Arab land. Zippori, which had been the largest Arab settlement, touches them the most. While passing Ben-Gurion Airport, one Palestinian yells out that it is Lydda, not Ben-Gurion. Liberals who drive past Ronald Reagan National in D.C. probably sympathize. In a Hanita museum, the tourists see an exhibit on the history of the conflict as it was in 1936. The museum knows precisely how many Jews died during one particularly hard fought night but not how many Arabs. Once they are back on the bus, the Palestinians complain about the museum&#146;s bias.

The documentary is separated into seven chapters, most of them titled after a piece of dialogue in that section. Chapter 3 is &#147;I don&#146;t want to see, I don&#146;t want to see&#148; and Chapter 6 is &#147;I never imagined I would walk among the Jews.&#148; The film&#146;s presentation is very dry and the pacing is positively septuagenarian. Because the cameraman, Sharon &#147;Shark&#148; De-Mayo, tries so hard to be unobtrusive, he tends to stay out of his subjects&#146; faces. That results in shots from unrevealing angles or from too far away. Alexandrowicz, perhaps in pursuit of profundity, leaves too many ponderous shots of the Palestinians simply walking around.

He does manage to capture some poignant moments in the film. A mother and son, separated by fences and barb wire, communicate by shouting over the Lebanese border, followed by her tossing him a packet of family photographs. In another instance, middle-aged Abu Dahab recollects being in prison and meeting then-prime minister Yitzhak Rabin. His voice fills with hope that just through such simple dialogue, peace may come. With reverence, Abu visits the site where Rabin was assassinated by a Jewish student in 1995. More hope comes in a dialogue between an old Palestinian woman and a younger one. They have both have lost their husbands, the former through war, the latter through life imprisonment for killing an Israeli soldier. The older woman wants vengeance for her husband&#146;s killer. The younger woman wonders whether the mother of the Israeli soldier her husband killed feels that same way about her husband.

The Inner Tour never quite comes together. Its emotionally compelling moments are too few and far between, and the movie does little to contextualize them, leaving it up to the viewer to make many socio-political-historical associations. The film is successful in its main objective, to present a very human Arab perspective, yet even that should be relatively obvious to all but the politically expedient. Unfortunately, they are the least likely ever to see the film.