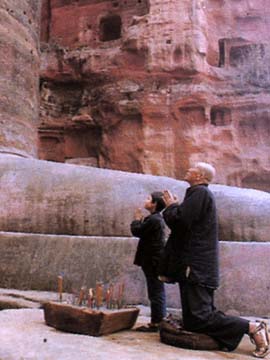 The King of Masks is a tour de force, a rare movie where every character demands your full attention and you are happy to give it to them. It tells a simple story. The time is the 1930s, a period of political turmoil in the Sichuan province of China. Wang, the King of Masks (Zhu Xu), is an elderly street performer, the last of his line, unhappily without an heir. He captivates his audiences who stop to see him illustrate traditional Chinese folk tales by split second changes in and out of a large array of fascinating masks. Tradition demands that the King of Masks pass down the secrets of his art – but only to a son or grandson.

This is a period in Chinese history when daughters can be sold or given away but sons are valued highly. Therefore the old man is amazed to encounter an eight year old boy being offered for sale by his penniless father. Desperate for a male heir, Wang buys the child. He and little Doggie (Zhou Ren-ying) hit it off immediately, and Doggie takes up residence on the old man’s primitive houseboat.

Then the King of Masks discovers Doggie is really a girl! But she has been sold seven times before and begs her "Yeh Yeh" (grandfather) not to sell her again. Truth be told Wang has already formed a bond with Doggie (and so have we), so he allows her to remain on the boat, but only as a servant. She turns out to be a gifted acrobat herself and for a while their combined street performances attract a welcome audience. But the old man refuses to show her the secrets of Masking, and it seems certain his knowledge will die with him.

Then Doggie makes a terrible miscalculation and in trying to overcome her error only compounds the situation. The King of Masks is put in jail and awaits execution because of Doggie’s attempt to provide him with the grandson he so desires. There is only one man who can save them both, the Living Bodhisattva Master Liang (Zhao Zhigang). The film comes down to its final moments as Doggie and Master Liang work to secure freedom for the King of Masks.

A word about subtitled films. Watching this beautifully filmed drama unfold I was struck by the anomalies of seeing a subtitled film in a language I do not understand (Mandarin Chinese). On the one hand, I know I miss many subtleties that would be apparent to a Chinese speaker, nuances of language and double entendre. On the other hand, this enables me to look more closely at each scene without having to concentrate on the dialogue. The King of Masks is so richly drawn, and the mean, dimly lit and cobbled streets of ancient Sichuan so beautifully filmed that I feel I have gained by that experience.

I recommend that you see this film on the big screen. By its conclusion, you will have allowed the wondrous King and amazing Doggie to draw you into their exotic world.