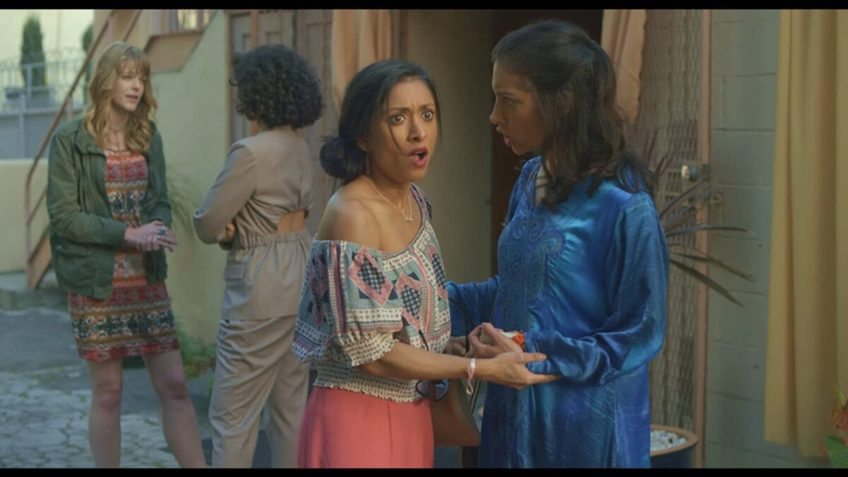 Prejudice, procreation, and mixed marriage form a comic triangle in The Last Conception by director Gabriela Ledesma. The story centers on a 30-year-old Indian American woman whose immigrant parents insist that she must marry and produce a child to carry on their lineage. Their only other child, a daughter, is unable to conceive and while she is married (to a white man) and they have an adopted child, that isn’t good enough.

Savarna Sikand (played by Nazanin Mandi), the single daughter, works in a fertility clinic headed by a Black doctor named Jackson (Matt Richards). Jackson and Savarna are also friends and Jackson knows what her parents do not—Savarna is in a lesbian relationship. As the movie opens, Savarna tells Jackson he won’t be invited to her parents’ home this evening as usual because she has invited her beloved Charley (Callie Schuttera). Jackson urges her to tell her parents the truth, to rip it off like a band-aid, to say, “I’m here. I’m queer. My girlfriend is a dime piece.”

Friday night dinner becomes a pressure cooker when her mom Mira (Veena Bidasha) finds out Charley is not a man and Mira wants to bring out her binder of eligible bachelors. Trying to help, Savarna’s sister Chitra (Lovlee Carroll) asks her husband Mike (Josh George) if he knows any available men and then she fixes on Jackson as a possible husband. Mira says she likes him, and she can’t think of a good reason not to ask him. Nonplused, Savarna blurts, “I’m gay.”

Mira’s jaw drops, and she quickly leaves the dining room. Chitra tells Savarna and Charley that she is happy for them. Really? replies Sarvarna. Chitra answers, yes, it takes the heat off me for marrying a white guy.

What is apparent early on is that Mira has made a variety of adjustments since she emigrated to the United States. Despite pressure on her daughter to marry and have a child, Mira’s approach to family life is a completely modern take on how an Indian family in America behaves. When she insults Savarna by telling her she needs time to adjust, her husband Davidia (Marshall Manesh), who typically champions Savarna and peace in this family of women, urges his wife to send Savarna a text and to keep the lines of communication open. In a flash of insight, Mira says she will, and she expects Davidia to contact his mother who lives in India. His reaction reveals this will be a stressful situation.

Without further explanation we see an older woman (Kanti Chowdhury) dressed as an Indian priest praying as her acolyte carries two suitcases. From this point forward things get mysteriously strange as grandmother arrives to ensure that their ancient bloodline dating back to the Buddha Siddhartha continues.

In this eighty-five minute film, every line counts. Screenwriter/book author Gabriel Constans keeps the dialogue flowing and cinemaphotographer Sam Wilkerson provides a brilliant palette of colors. The actors, especially around the constant episodes of shock, are each memorable for their reactions and the timing of their reactions. George (GiBi) del Barrio’s music adds a peppy lilt that lifts one’s spirits.