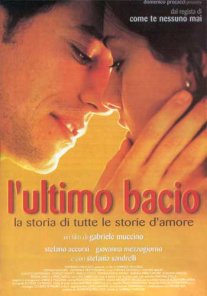 In the guise of broad comedy, The Last Kiss explores the perennial conflict between the raging hormones of twenty-something males yearning to spread their seed as widely as possible, and their women, equally obeying the anthropological drive to perpetuate the species through a committed relationship with a loyal and monogamous partner providing support and protection for their offspring. While an engaging cast and director Gabriel Muccino come up with some amusing moments, the overall effort is severely compromised by its too often shrill overstatement and a length of two hours, easily a half hour more than is merited by the contents.

At the center of the film is a group of five male friends, each rather schematically representing a different aspect of the conflict between freedom and commitment. Carlo (Stefano Accorsi) is living with Giulia (Giovanna Mezzogiorno), who is pregnant with his child. She, step by step, seeks to pin him down, not insisting on marriage, but first trying to sell him on the advantages of buying a house together. He loves her, but he’s squirming away from further commitment–and pursuing an 18 year old nymphet as well.

Marco is the only member of the group with a clear commitment to marriage and his wedding is a major scene in which the societal rites of blessing and supporting a union are contrasted with the realities of relationships amongst the guests. Alberto is the dreadlocked friend, free as the wind. He connects with an equally casual 32 year old unmarried woman; both are practitioners of the "zipless fuck," but before long she’s making relationship talk, revealing the neediness underneath her protestations of breezy independence.

Then there’s Adriano, married and with an infant at home, feeling trapped and bursting with frustration and need to escape. Finally there’s Paolo, rejected by the woman he loves. He has resisted going into the family business and is primed to run off to foreign adventures, but is caught up in reality when his father dies.

In addition, Anna (Stefania Sandrelli), Carlo’s prospective mother-in-law, is a principal character, drawn in for a viewpoint from the other side of the age divide, suggesting what happens in marriages over a longer period of time, both positive and negative, but distinctly concluding on the side of settled domesticity.

The film crosscuts constantly among these characters, following each of their stories in varying degrees of detail. Less here might have been more, since covering so much territory, even at this length, of necessity dilutes the depth of the characterizations. Carlo and his relationships are given the most time, but for all his charm, Accorsi (The Son’s Room, His Secret Life) plays this role broadly, predictably, and without particular insight. His comedy is primarily reactive, a rather sly deadpan response to the things that happen to him.

The most successful character, ironically, is Anna who struggles to balance the lack of passion and the routine noncommunication of a long term marriage against the oft forgotten consolation of having a partner with whom to grow old. Long-term veteran Sandrelli (Stealing Beauty, 1900) catches the vulnerability, the restlessness, the doubts, and the wisdom of a woman of a certain age reaching a critical juncture in her life and marriage.

For all its hyper level of activity, there’s really not enough going on in The Last Kiss. Muccino’s solution to bridging the unfunny and the imperceptive is to raise the decibel level. But having his characters shrilly venting irritates and only places the film’s weaknesses into high relief.