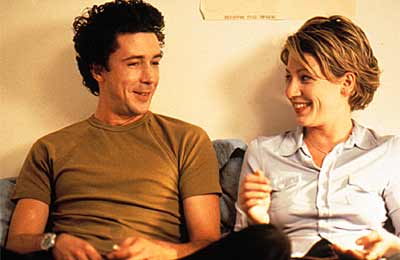 Frank is a London yuppie, roughly 30, who lives next door to a crackhouse. He’s kept the place for years, clinging to his college affectations – the rough neighborhood is his badge of authenticity, a means of convincing himself (if no one else) that he’s a bohemian artist. Tired, finally, of hearing junkies bay outside his window every night, and starting to realize that he’s too old for this charade, he starts looking for a new apartment.

It wouldn’t be a bad premise for a comedy, a satiric look at a perpetual adolescent finally succumbing to adulthood. Jamie Thraves’ debut feature The Low Down, however, is anything but a comedy. Shot in the kinetic style of a gritty, low budget urban thriller, it’s all nervous energy: jittery handheld camera, fragmented close-ups (the cameraman is always right in the character’s face), freeze frames for punctuation. The mannered camerawork is mismatched to the material, serving mainly to call attention to how little is really going on. The Low Down plays like a gentrified version of Scorsese’s Mean Streets, with Charlie dumping Johnny Boy and buying a house on Long Island.

As played by Aidan Gillen, Frank is a handsome blank. A classic milquetoast, he’s the sort of guy who gives money to beggars not out of compassion but because he’s afraid that they won’t like him if he doesn’t. We’re never privy to his emotions – all we really know is that he’s vaguely dissatisfied with the drift of his life but unwilling to assert himself. When he gets involved with Ruby, his realtor (Kate Ashfield), he seems to be motivated primarily by inertia – she seems interested, so why not? He mainly just wants to get laid, but doesn’t have the stomach to break it off even as she gets more and more attached to him.

Frank works with two old college friends, designing and building props for game shows. His boss Mike (Dean Lennox Kelly) is good natured and unpretentious, a nice guy prone to joke about his girlfriend and drop into inept impersonations after a few beers. John (Tobias Menzies), on the other hand, hasn’t managed the transition from art school to the workplace at all. He thinks the job is beneath him, but he’s too lazy to become the artist he thinks he is. He acts out with stupid gestures towards rebellion, flashing his contempt by showing up late or using the wrong color paint, but carefully staying just this side of insubordination by playing it all off as a joke. It’s a fine performance. Menzies nails the sort of artist manque who’s been living off his potential for years with no intention of actually risking it by making something he could be judged against. He’s just charming enough to get away with being a jerk, at least for awhile.

Even better is Rupert Proctor as Frank’s roommate Terry. Terry is a middle aged sad sack who’s unable to hold a conversation without breaking into bad jokes and nervous cackles. He tries to keep up appearances with a blandly optimistic smile, but his panicked eyes give the game away: he drips desperation. It’s a thoroughly convincing picture of social ineptitude – it’s hard not to cringe as he talks – and it’s cannily played for neither laughs not pity. Terry is the sort of person whose flaws are just sad, since he knows that he’s a loser but can’t do anything to help himself. He has an extraordinary moment at a dinner party, where one polite, devastated smile speaks to a lifetime of frustrations.

Thraves pursues a risky strategy here, pitting the better drawn secondary characters against Frank’s impassivity. It makes their performances that much stronger, but it leaves a hole in the center of the film. It’s the brilliance of the secondary performers and the acuity of the writing in their scenes that makes The Low Down so maddening. Everyone we encounter is more intriguing than Frank and everything they do is more interesting than his search for an apartment. It’s a rare film that contains this much good material, all of it incidental.