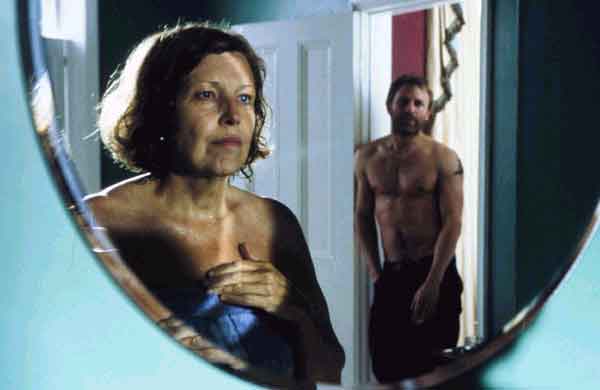 At the beginning, the mother, May (Anne Reid) is almost a caricature of a middle-middle class suburban British mum of a certain age and time–she’s got a double chin and maybe ten extra pounds, she looks tired and mousy, and she is without identity aside from the role of wife to her dominant, equally out-of-date husband, Toots (Peter Vaughn). Once her role included being mother as well, but her kids are adults now with lives of their own.

Son Bobby (Steven Mackintosh) is married with three kids, a wife who owns a smart shop and ambitious business plans of his own. Their London home is being redone to greater heights of yuppie chic by a hunky carpenter, Darren (Daniel Craig), who was a college friend of Bobby’s.

Daughter Paula (Cathryn Bradshaw), a divorcee with a son, runs a writers’ group and is deeply involved in her psychotherapy. (When May first learns that Paula is in therapy, she asks, "Can’t you talk to your hairdresser like everyone else?") And Paula, it turns out, is having an affair with Darren.

The catalyst for change is the not-so-sudden death of Toots, which leaves May afloat without an identity of her own. Uncomfortable being alone in her suburban home, she comes to town to her son’s, where son and daughter-in-law, faced with an open-ended visit, argue about whether she can stay. She ends up staying with Paula instead and Paula uses the opportunity to dump her life’s frustrations in her mother’s lap: "You hardly touched me…You never praised or encouraged me…" (At this point some might be tempted to tell her to get a life–people become adults when they stop blaming their parents for their failures.)

Without husband, and with offspring who don’t offer much in the way of support, May needs to find her way into a new life. Step one, as it turns out, is an affair with Darren which succeeds both in reawakening her dormant sexuality and teaching her something of the modern world of casual sex without commitment.

With the affair the key element in May’s emergence into a new life, the film is weakened by the stretch of plausibility in the connection between her and Darren. A backstory is provided for Darren (estranged from his wife, but deeply attached to his autistic son), but the character is never developed in sufficient depth to provide him with consistent motivation. He’s there to provide the lightening rod from which May gets charged, as it were, and family relationships inevitably shift and change as a result.

The most important change, though, is in May, and the many steps of her developing independence and self-confidence become the overarching plotline that carries the film. Writer Hanif Kureishi (My Beautiful Laundrette, Intimacy) and director Roger Michell (Changing Lanes, Persuasion) together have an eye for the telling detail; they take their time building a convincing character in May, aided by a sensitive and sympathetic performance by Anne Reid (Liam, Love and Death on Long Island). The mother’s flowering is a lovely thing to see, even if its vehicle wavers perilously on the borderline between drama and soap opera.