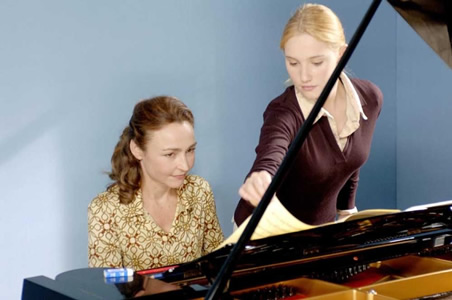 “The Page Turner” is French right down to its very bones. It has everything the French do so well—the extremely controlled, often expressionless acting (the stony faces that reveal so little—think Huppert or Deneuve); the crisply written, spare dialogue; the highly structured mise-en-scene; the undercurrents of class consciousness, often to the point of the disparagement of bourgeois values; and the mysterious, often sexually ambiguous, relationships between women.

Denis Dercourt comes by it honestly, this French way, since he is after all French-born. Why “The Page Turner” is so derivative of Claude Chabrol is another question. Certainly, Chabrol’s style has influenced a generation of French filmmakers. But comparisons of Dercourt’s well-crafted psychological thriller to much of Chabrol’s work in that genre suggest an almost eerie desire to emulate. Anyone who has seen “Les Biches,” Chabrol’s study of a lesbian relationship between two women in which one personality takes control of the other, cannot help but wonder if “The Page Turner” is Dercourt’s own variation on Chabrol.

As for the story that “The Page Turner” tells, it’s pretty generic—a young woman insinuates herself into a family’s trust in order to seek revenge on the mother. The film reveals the incident that started it all in its opening sequence. A twelve-year-old girl is getting ready for a piano audition that she must pass in order to get into a music conservatory. One of the judges presiding over the auditions is a famous woman pianist, Ariane Fouchecourt (Catherine Frot). During the young girl’s audition, the pianist agrees to sign an autograph for a fan, and the disturbance flusters the child and she ends up performing badly. Unable to get into the conservatory, the child leaves in tears and decides to give up the piano.

The idea that one audition can make or break a career is not uncommon in the world of concert performing, and as a motive for revenge, seems quite valid. But all realism ends here, as the film enters the sinister world of damaged psyches and extreme behavior. Now all grown up, and a very pretty young woman at that, Melanie (Deborah Francois, who was in last year’s hit “L’Enfant” by the Dardenne brothers), has found the famous pianist and manages first to become her child’s nanny, and then her page turner—the person who sits next to the pianist and turns the pages of the music during a performance.

In the middle of an illustrious career as a concert pianist, Ariane has suddenly developed a severe case of performance anxiety. She finds Melanie to be a calming influence, and begins to rely on Melanie’s presence to help her deal with her debilitating stage fright. Thus begins a very bizarre and twisted relationship, most of it barely suggested, as Melanie gains more control over Ariane’s emotional life.

The ease with which Melanie becomes a part of Ariane’s life is bit farfetched, and our credulity is stretched even further when Melanie’s influence turns into domination. But it is when the mere hint of a sexual component to their relationship turns into a full-blown romance—at least for Ariane—when the film teeters into disbelief. Unfortunately, Melanie’s thorough seduction of Ariane is necessary for her final vengeful act to work. A swift hammer to one of Ariane’s lovely hands would have been easier to orchestrate, and more believable. Melanie already showed a capacity for violence in a bloody encounter with a violist in Ariane’s trio. With that little vignette, Dercourt crossed the line from a tale of revenge squarely into the realm of psychopathology. And once Melanie’s criminal behavior was established, it would have been easy to believe her capable of anything—and even getting away with it.

And yet, none of this seems to matter, for Dercourt’s film is more an exercise in style than a study of character. This is formalistic filmmaking at its most tautly drawn, right down to the severe ponytail—every hair rigidly in place—that Melanie wears. Even the actors’ eyes seem to blink on cue. Or, in Melanie’s case, they don’t blink at all. Deborah Francois’s performance is so inexpressive that she seems possessed, as though some alien had sapped all the life out of her, and left her with nothing but the single aim of vengeance to define her. And as the young Melanie, child actress Julie Richalet (in a chilling performance) reminded me of one of those demonic children in “Village of the Damned,” or that infamous child villain played by Patty McCormack in “The Bad Seed.”

Catherine Frot’s performance as Ariane is almost as tightly controlled, though she has the benefit of Ariane’s frayed nerves to give her some room for a bit more tone. With these two women vying for who conveys the least emotion, Frot loses by virtue of her character’s handicap. No wonder the seduction seems so improbable. How can one derive passion out of a mere glance, or an ever so slight brush of the hand?

My guess is that the reason French directors seem to elicit such inexpressive acting is in order to allow us to concentrate on style—the underlying framework of cinema—and an overly dramatic performance might prove too distracting. It’s a theory based on little, but I had to at least introduce the possibility. What seems just as likely is that Dercourt’s decision to contain his actors’ performances might also have something to do with his background as a professional concert musician. The story is there, like a piece of music, and the characters are instruments who play the notes as the conductor dictates. Dercourt’s baton is firmly in his hand, and the actors have interpreted the material according to Dercourt’s own rhythms. For “The Page Turner,” Dercourt set his metronome on the slow side, and the film’s pacing suggests a director with some control issues. The result is a film of impeccable style, with every note hit to perfection, but without much soul.